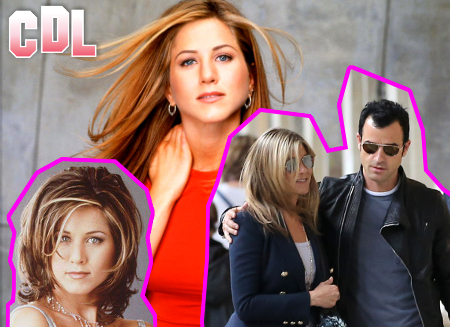 In celebration of Jennifer Aniston’s engagement, Celeb Dirty Laundry is taking a look at the actress’s entertainment career and how exactly this former television star became one of the most powerful players in Hollywood.

It all started one fine day back in 1994 when Aniston was cast in the role of the groundbreaking character Rachel Green in Friends. Aniston and her co-stars quickly became household names and Aniston’s hairdo was being emulated by millions of women all across the globe. She became the Madonna of television and won the heart of America (and the world). Friends ran for a staggering ten years and became the television show for a new generation.

The soundtrack of the show, “I’ll Be There for You” by The Rembrandts, became one of the most iconic and recognizable jingles in television history.  We have to ask, what happened to Aniston? How did she obtain the title of America’s Sweetheart and become one of the most iconic film stars of her generation? Well, the answer is not what you might expect, because Aniston has had more misses with her film career than with her love life.

Aniston started making her dent on the film industry with the 2002 sleeper hit, The Good Girl, where Aniston played a checkout girl with issues. She starred alongside the then hot property, Jake Gyllenhaal. In 2005, after her friendship with Friends ended, she was cast as Lucinda Harris in the blackmail thriller Derailed, alongside Clive Owen. This is where things started going awry for Aniston and the seams became loose from her bed of fame. The film received polarizing reviews and Aniston was lambasted by critics for her stoic performance. Things became slightly worse for poor Aniston when she starred in The Break-Up with Vince Vaughn. This film created a knee-jerk reaction in critics and fans of Aniston alike, due to the mangled plot and miserable acting. This is also the film which spawned a short, whirlwind romance between Aniston and Vaughn, which resulted in media hurricane from hell.

A few small film hits (Marley and Me) later, Aniston starred in the absolutely nonsensical comedic melodrama of The Bounty Hunter in 2010, alongside Gerard Butler. This film was absolutely ridiculed by film critics for exhaustive action clichés and the mindless scenery chewing of the lead characters. The Bounty Hunter received three Razzie Awards (the Anti-Oscars) and included Jennifer Aniston in the worst actress category.

The Switch, Just Go with It, and Horrible Bosses resulted in lackluster reviews for Aniston, with film reviewers pointing to her as “a mighty successful television star, which has experienced an eight year film drought — this is also the extent of her film career”.

Her latest comedic offering was Wanderlust, an acidic and original comedy with excellent comedic timing by both Aniston and her co-stars (Paul Rudd). The film opened to generally favorable reviews and critics praised Aniston’s “talented acting”.

It is a toss-up whether Aniston is a brilliant actress with bad film choice, or whether she is an average actress with brilliant partner choices. Her romantic endeavors and liaisons have been ravaged by the media. Aniston having been married to Brad Pitt gave Aniston’s career a boost, unlike her now defunct ex co-stars (except for Courtney Cox). The actress has recently been destroyed by the media, due to her on-off relationship with Justin Theroux, but she has finally taken the next step and became engaged to Theroux over the weekend.

Jennifer Aniston has failed at finding the perfect partner after her scandalous love triangle with Pitt and Angeline Jolie. Aniston has not experienced the best film run in Hollywood and, sadly, she will forever be known as Rachel Green, the girl who could’ve been so much more.