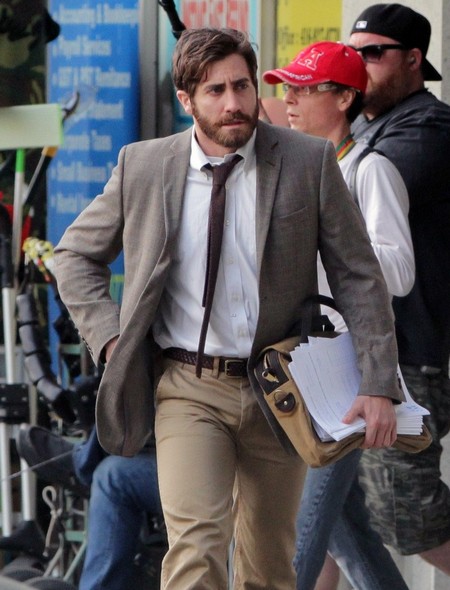 Tis the season for movie stars to start flocking to the beautiful city of Toronto to film some movies – and Jake Gyllenhaal is one of them.The 31-year-old actor is in the Tdot to film his latest project, An Enemy, and was spotted filming out on the streets today.

Jake stars as a “history teacher living a quiet life with his girlfriend until he discovers a physically identical man living nearby with his pregnant wife. The teacher stalks his double until the couples’ lives become intertwined with lethal consequences.”

The psychological thriller is based on the novel by Jose Saramago titled “The Double”, and also stars Melanie Laurent (of Inglorious Basterds fame) and Sarah Gadon (Cosmopolis, which was also filmed in Toronto last summer with my boyfriend Robert Pattinson), as well as Isabella Rossellini.

Jake is said to have just arrived in the city, staying here until filming ends in July.  Last night he was spotted dining at Hiro Sushi in the St. Lawrence Market area, while today marked the actor’s first day on set.

So will we be seeing lots of Gyll-Sightings over the upcoming weeks?  I certainly hope so, not only is he an amazing actor, but he’s not hard on the old eyes either.

The Enemy is currently shooting at the Cinespace studio on Kipling Ave for those of you keen on tracking down Jake, although after last years mad hunt to find my RPattz, I can tell you that these stars fly under the radar.  That being said, I do have a pretty good eye for handsome scruffy-bearded men strolling around the city.  It’s what I do best.