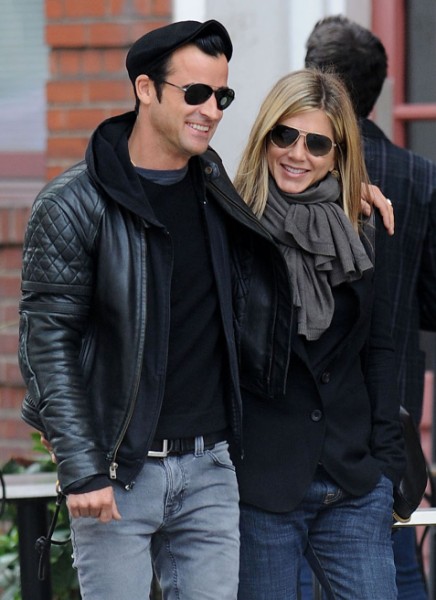 Is that kind of like a backhanded apology? You know Brad, I forgive you for leaving me for that Venus Flytrap but I’m over it now. Besides, you did me a favor anyway. Justin is so much better in the sack than you are!

That’s the latest coming out of the Jennifer Aniston rumor mill. Apparently Jennifer is so happy (have you heard?!) that she’s trying to put her demons with Brad and Angelina Jolie behind her and even wrote Brad a lovely little note addressing the old ass issue.

According to Star magazine:

“Jen still can’t believe such an amazing relationship has finally come her way,” says a friend. “She really wasn’t expecting to fall in love, and it took her by surprise.” Jen has tried to forget Brad over the past seven years, but friends say their tumultuous relationship still weighed heavily on her… until recently.

“She used to think about Brad all the time,” the insider confirms. “But these days, he barely crosses her mind. It’s like, ever since she met Justin, she has really finally started to get over Brad and what happened in their marriage.”

Jen even wrote Brad a note, telling him she has forgiven him for the past and hopes they can be friends… she doesn’t hold any grudges against him and Angelina. She’s only looking forward to her future with Justin.”

“Justin makes her feel special and treats her like a queen… she definitely wears the pants in the relationship, and Justin is happy to let her have her way. He does everything he can to keep her smiling. Jen always says how ‘authentic’ Justin is. She truly admires him.”

I don’t know… the fact that she had to write him a letter tells me that she’s not exactly over him. It’s like she has daddy issues and she still needs validation from him. I’m moving on! Can you see I’m moving? What do you think about me moving on? I’m just not feeling the bond is broken on her end yet. Would Gwyneth Paltrow in her Goopy wisdom have ever written a note? Hells no! Gwyneth would have moved on and made us believe that it was the best decision EVER. She basically did just that when she broke off her engagement with Brad. And she certainly didn’t sell this hard. She won an Oscar instead which probably helped.

Because that’s what this feels like, right? It’s as if Jennifer keeps selling the relationship with Justin so we’ll finally acknowledge she’s not pining for Brad anymore. Only, it keeps backfiring for me! I’m just not feeling it. The Jennifer Aniston’s in love train is just a little too much for me at this point.

So is the love triangle over now that Jennifer Aniston forgives Brad Pitt or is it now a love square? Do you think it sounds like Jennifer’s truly over him?