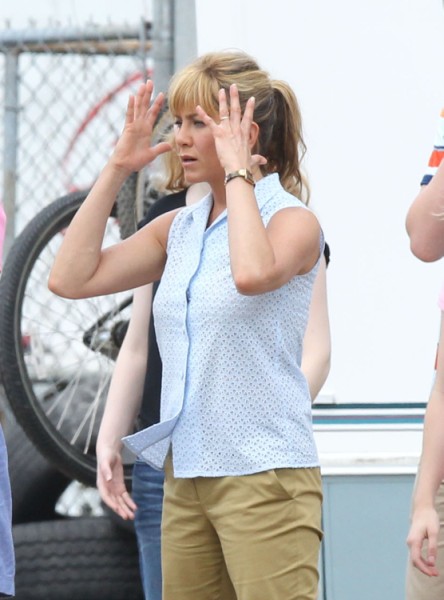 The Jennifer Aniston’s happy promotional tour is continuing full speed ahead. She was just on Chelsea Lately crying and encouraging others to get engaged and now she’s telling Us magazine that she was completely shocked by Justin Theroux’s proposal. Sometimes I wish I had Ricky Gervais with me at all times so I could poke him to say, “Stop talking shit!” But, alas, I do not have the luxury so let’s just report what Jennifer told Us instead.

“It was one of the sneakiest jobs I’ve ever seen. I had no idea. I didn’t know what I wanted for a ring. He just knows what I like,” she told the mag.

Really Jen? Let’s not bullshit a bullshitter. You had no idea? Come on! Of course you did! Stop playing the blushing virgin bride bit. This is your second marriage! You’re telling me you and Justin didn’t have a shit or get off the pot discussion during your long ass European vacation this past summer? And weren’t you guys wearing matching gold bands for awhile before he could afford that eight-carat rock? (Sorry, I don’t know why I resorted to writing this post to Jen instead of about Jen. I’ll try to get control now).

I’ll give her that she didn’t know EXACTLY when he was going to propose. She probably had a feeling it would happen any day but didn’t know the EXACT hour or minute. Sure. Fine. But they were dating for awhile and they weren’t getting any younger….

But we like Jennifer Aniston surprised right? She’s American Sweetheart. It’s like our best friend has found happiness again! I’m not gonna lie… I watched her on Chelsea Lately and even I thought it was cute when she talked about Justin. I hated Chelsea Handler’s embarrassing gushing though. I’m sensing Single White Female with that one. So Jennifer’s happy and she wants everyone to know. Good for her! Is it a coincidence that she’s finally flashing the ring as she unveils her new joint venture with hair care company, Living Proof? Is this not a happiness promotion after all but actually a hair care product promotion? Is America’s Secret pimping out her engagement?

Do you believe her proposal surprise bit or did Jennifer Aniston fake her story to endear herself more to the public… and sell Smartwater and frizz free hair gel?