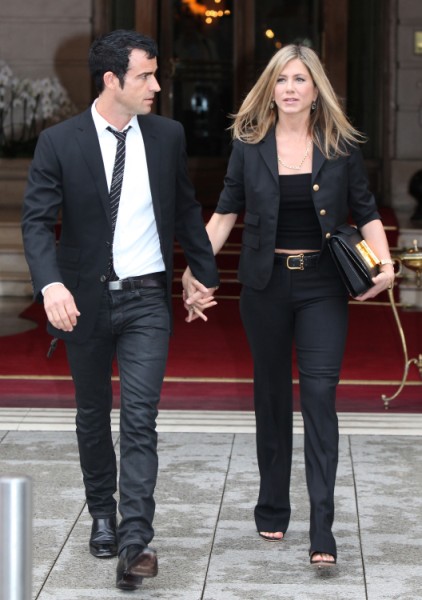 It’s about time! We all knew this story was coming. I’m just surprised it took this long. Jennifer Aniston invited Brad Pitt’s mom to her wedding to Justin Theroux and Jane Pitt isn’t going to let Fox/Evelyn Salt/Tigress or Lara Croft get in her way. I can’t figure out who’s crazier – Jane or Jennifer.

“Jennifer wants Jane to be there,” said a source. “She’s closer to her than she is to her own mother Nancy and it just feels right. Jane is thrilled that Jennifer has found happiness again,” the insider tells The Sun. “She has been on the end of the phone and in person offering advice and support for the past seven years. She wouldn’t miss Jen’s wedding for anything.”

Really? Anything? Like even if her son and quasi new daughter-in-law told her it would make them feel awkward or perhaps hurt their feelings if she did? Look, I get that Jane has special feelings for Jen and that Jen sort of has no mom of her own. Fine. But that was eight years ago! Get on the truck and move on. Let’s assume this little tid bit is true. What is wrong with you Jennifer Aniston? I’d understand if Jen was still close with Brad or if she even rustled up a friendship with Angie. Then I wouldn’t think this was such a big deal. But that’s not the case, right? Angelina Jolie and Jennifer Aniston hate each other. Why else does Jen let Chelsea Handler bash her at every turn?

So in that case, is this one last f-ck you to Angie? You might have got the man but I’ll always have his family type deal. Sorry, Jen  you got the short end of the stick on that one.

Also, I just read that Jen and Justin are planning a wedding in Kenya next year. When has Jennifer Aniston ever been to Kenya? Is this a Justin detail. Again, sorry to be so his and hers but don’t Angie and Brad own the rights to Africa? I know it’s a big place but they’ve adopted from there and had babies there. When you think Africa and celebrities you definitely think Jolie. I know, it’s not fair for them to hog Africa but wouldn’t you think Jen would avoid all comparisons to the couple? In that vein, she wouldn’t invite her ex-husband’s mother to her new wedding either.

What do you think about Jennifer Aniston inviting Jane Pitt to her nuptials. Is it sweet or kinda rude? Will Jane Pitt reuse her dress for the Angelina Jolie wedding?