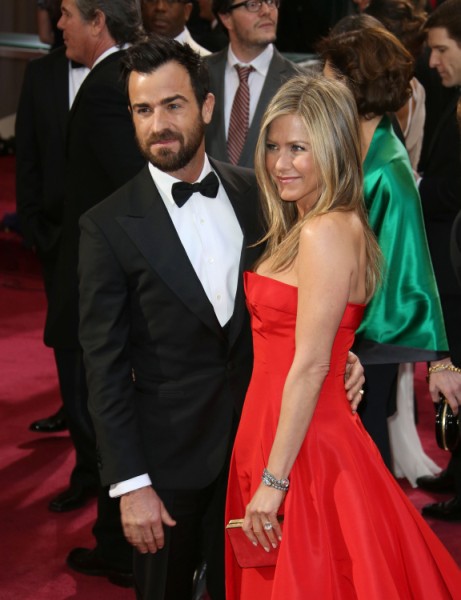 But according to British tabloids Angelina Jolie is doing what she does best and snatching the spotlight away from Jennifer Aniston in the days before her upcoming wedding. Apparently Brad Pitt picked up a marriage license at the end of last month which stated he had to do the deed within 90 days. I don’t remember him doing that but it’s The Sun so it must be true!  So now everyone’s worried that Brad and Angie are going to marry before May which would be too close to comfort for Jennifer and Justin Theroux who are rumored to be walking down the aisle sometime in the next few weeks.

“Everything points to them getting married in May just after the Cannes Film Festival ends, because they’ve got their hearts set on tying the knot in France,” a source told the newspaper, but added there will be hell to pay if they do. “All that goodwill would go out the window if Brad’s wedding date comes close to hers. Jennifer will see it as an attempt to upstage her and there will be a battle over Hollywood guests.

At this point could Jennifer really be pissed about who has the bigger wedding with the bigger stars? That would be the furthest thing from my mind. I’d just be pissed over the fact that Brad and that demon had the last eight years to make this happen and they had to pick the same damn time period. Who does that? Is life that coincidental? I doubt it. But, then again, I doubt this story. As much as we gossip wh-res would love something like this to go down, Brad Pitt isn’t that insensitive, right? I know a lot of you out there think Angelina is but Brad couldn’t possibly be. I mean yes he has done some insensitive things in the past like dump Jen for Angie and start having kids right away but that’s all water under the bridge. This love triangle can’t go on forever, right? Right?

So is Angelina Jolie stealing Jennifer Aniston’s wedding date or is this all just wishful gossip thinking? Besides, I thought Brad and Angie got hitched over New Years anyway….