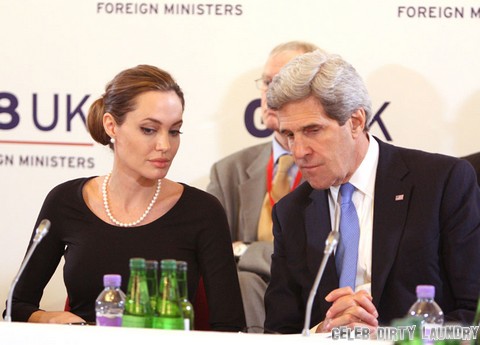 Perhaps it’s time that Angelina Jolie stop hop scotching across the country to impoverished countries and instead just stay home, preferably with a huge sandwich. I say that because Angie’s latest goodwill mission, this time to the war ravaged Democratic Republic of Conga, left the actress herself in a bit of a medical crisis. Angie isn’t exactly known for taking care of herself and has appeared to deal with some sort of eating disorder for years now, not to mention the admitted past drug use.

This time around, according to the April 22nd print edition of National Enquirer, Angie dropped like a ton of bricks, passing out in a bathroom while trying to do humanitarian work. Instead of bringing hope and health to the locals, she caused a whole rash of concern because she actually looks more emaciated then those she was supposed to help. The people were actually concerned about her because with her sunken eyes and bad coloring, Angie was hardly the portrait of good nutrition and health!

She also waited until arriving home to tell fiance, Brad Pitt what had transpired. He is said to be really fed up with her insistence on trying to save all of the third world while making a mess of herself and the family that she leaves behind. He tried to talk sense into Angie but it’s unlikely that she’ll listen to Brad because she has heard- and ignored- it all before. It’s almost like what people say to her doesn’t matter, even if they have her best interests in mind. The minute anyone makes a suggestion Angie instantly, defiantly shoots it down. It’s a shame that she doesn’t seem to understand that her kids are also suffering from the choices that she makes.

Will Angie ever stop trying to save the world and instead try to simply improve the quality of her family? Tell us your thoughts in the comments below!