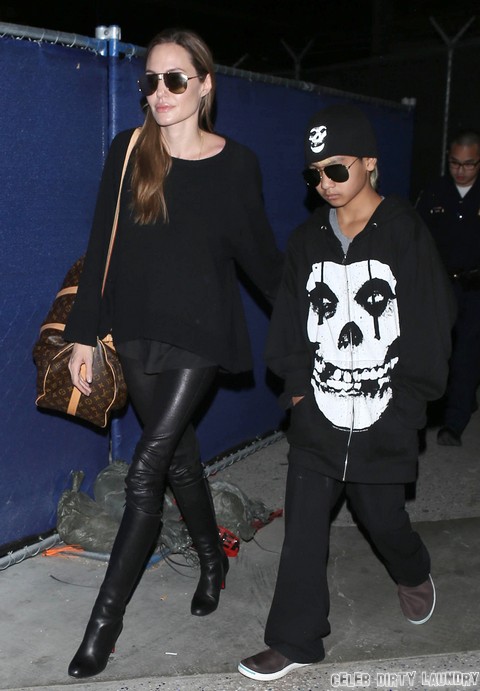 I guess when we’re talking about Angelina Jolie, the apple doesn’t fall far from the tree. She recently found out that her 11-year-old son Maddox Jolie-Pitt was crushing on a little girl and so Angie arranged a date for the smitten young couple. The family has wisely opted not to mention her name in order to protect her anonymity, but according to the May 6th print edition of National Enquirer, they met at a party and swapped phone numbers.

A whole bunch of texts later, Pax spilled the beans and told Angie that Maddox was crushing on this girl. She supposedly did exactly what a good parent would do and checked her sons phone to see exactly what kinds of texts had been flying back and forth. Once she realized that it was okay and that the content was age-appropriate she suggested calling the girls mom so that they could get together.

Maddox and his friend stopped for a bite to eat and then hit up a movie, of course with a bodyguard in tow. He had such a good time that they’ll probably go out again. Angie herself started dating at a ridiculously young age so it doesn’t really surprise me that she would allow her kids to as well. I’m sure Maddox is calling it a real date. Do you think kids this young should be allowed to date, or could Angie have looked at it as just getting two kids together to spend some time?

If she lets her kids date this young, what will they be doing by the time they turn 18? Let’s face it these kids have access to anything they want and the cash to back it up. I think she’s going to have her work cut out for her if she wants them to steer clear of all the pitfalls that swallowed her. Do you agree? Tell us your thoughts in the comments below!