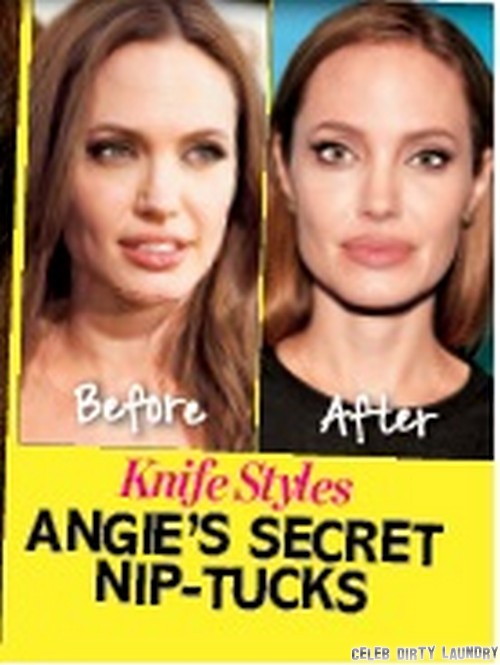 Angelina Jolie plastic surgery rumors are nothing new, but according to the latest cover issue of Life & Style Magazine, Angelina Jolie has gone through various nip and tucks in the past few years. The headline states ‘Angelina’s secret nip-tucks’ and seems to show an image of her from several years ago juxtaposed with an image of her from the recent Disney convention, when she was promoting Maleficent.

To be fair, I do think she’s had work done, but I don’t think it’s to the extent that the media and tabloids make it out to seem. We know she hasn’t had her lips enhanced, but there were actually rumors that she had them reduced, and then filled out again to get rid of lines and other signs of aging. Other than that, I wouldn’t be surprised to know she has had botox and fillers, because her face did look unnaturally smooth at the D3 convention, even more than it does normally.

Look, Angelina Jolie has superior genetic material, so this could just all be the result of genetics. But even the most beautiful people fight aging in Hollywood, and Angelina’s probably no different. Although she’s shying away from movie roles that focus on her looks, she still needs to maintain her public image and her looks are a very large part of that.

Of course, no matter what she does, signs of aging will eventually set it. At 38 years old, a mother of six children, and a humanitarian AND a movie star, exhaustion will also play a role in the aging process, and although Brad Pitt tried to fight it for so long, you can already see the signs on his face.

What do you guys think of the nip-tuck rumors concerning Angelina Jolie? Let us know your thoughts in the comments.