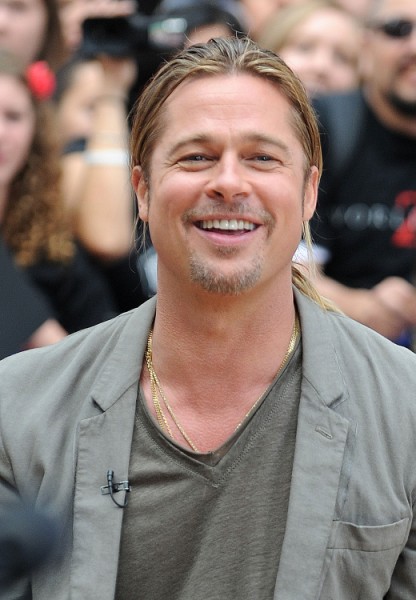 This is just a low down dirty shame. I get no smutty, smug happiness from this post whatsoever. I thought Brad Pitt’s face would grow old gracefully. I thought he’d go the natural route. I know that’s naive of me. I know he’s a movie star, equipped with the same insecurities and addiction for attention as the rest of them. But this is Brad Pitt. Fillers and plastic surgery just seemed so beneath him, so… uncool.

And I have no proof. I have eyes though. And I’ve talked about the bloat face before. Lainey Gossip mentioned it again on her site yesterday. You can see something different during his whirlwind promotions of World War Z. I thought maybe it could be stress eating or just pure exhaustion from all the pimping but I need to stop fooling myself. It’s injections, right? Because why else would his body look the same and only his face have that puffed out feel? And do you see any wrinkles anymore? I don’t. When he promoted Moneyball a few years ago he definitely had them and they looked hot. It gave him that worldly, worn character that, you can tell, he’s so intent on cultivating right now. But now this. I’m not feeling it. Are you?

Maybe I should give him a break. Dude is turning 50. Can you believe that??? He can’t be Tristan Ludlow forever. But an older Tristan would have been a ragged, leathery Tristan and that would have been hot as hell. But this? I can’t get behind this. At least it’s not full on plastic surgery. Brad Pitt’s just been hitting the needles. Moderation is they key. So why do I keep harping? Because it looks desperate – like Tom Cruise desperate. A man nervous about losing his fame and his looks. Couple that with the whoring he’s doing for WWZ and it makes me sad. This whole thing just makes me sad. Perhaps I’ll go see the movie for that reason alone. Is that what he’s hoping for at this point? A pity ticket. I’ll buy a pity ticket if it stops the fillers.

Side note: Could this be Angelina Jolie’s doing? Have you seen Billy Bob Thornton’s face lately? Does she drive the men in her life to shave a few years off?