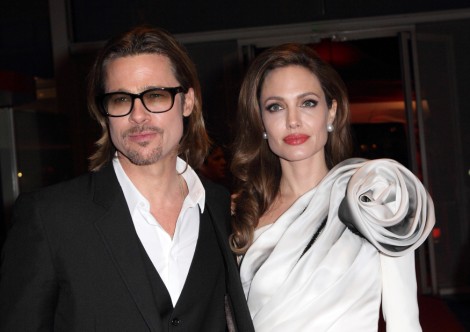 Before you shit all over the title let’s talk timing. What Angelina Jolie did was brave. I think we can all agree on that. She took preventative measures and had a double mastectomy in hopes she wouldn’t suffer the same fate as her mother. And, in making it public, opened a dialogue for women in similar situations. But now we’re finding out that her first appearance post-announcement will take place at the Brad Pitt/World War Z premiere. Is this a case of the Jolie-Pitts using the Angelina Jolie/mastectomy story to promote the drama-ridden movie?

There’s no question Jolie’s presence helps the film. There’s nothing like Brangelina star power. And this movie needs it. I haven’t heard any horrible reviews so far but all the money and bitching that took place to get the movie made is on a gigantic scale. If it bombs this could very well be Brad’s Waterworld. And we all know what happened to Kevin Costner after that flopped. He needs this. His last few movies have been artsy, passion projects – somewhat critically applauded but box office duds. World War Z needs to be a massive hit this summer.

So, again, timing. Why did Angelina come out with her New York Times piece so close to the movie opening? Was timing that important to her story? Could she have delivered the same message a couple months after the movie was out in theaters? Breast cancer awareness month is October after all. Wouldn’t it have made sense to make her statement then? Perhaps the couple was worried about a leak. Perhaps Angelina and Brad were tired of keeping their secret. Who knows? I’m just saying this couple is very good about using its relationship in the media when they need to sell something. Brad’s recent Esquire magazine interview is a testament to that. They talk when they need to talk. I’m just wondering if the awkward timing between the New York Times piece and the premiere bothers anyone. Does the Angelina Jolie/World War Z premiere appearance cast any shadow on her recent reveal or is all of this purely coincidental?