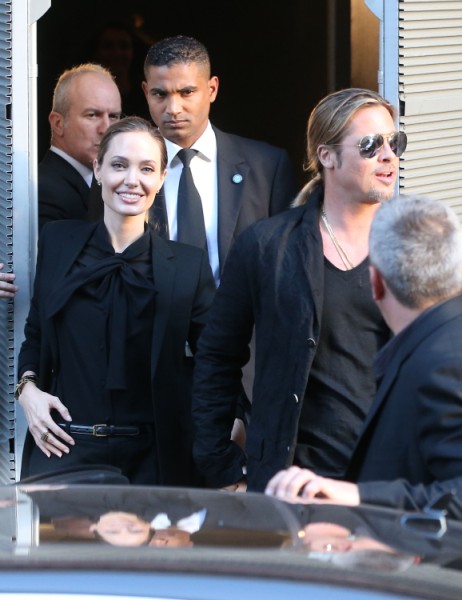 But Jennifer Aniston is still a go, right? Maybe? She’s not a bad influence after all. She might smoke a little, or maybe a lot, of pot from time to time but she’s no Quentin Tarantino, Jonah Hill and Philip Seymour Hoffman. Those little trouble makers have gotten the ax from the Brad Pitt/Angelina Jolie wedding invite list.

And really, can you blame Angie for putting her foot down? She’s worried these dudes are bad influences and she wants the day to be perfect. According to the National Enquirer their past indiscretions just make them too risky. Hoffman’s just coming off a stint in rehab due to heroin and Quentin’s just f-cking looney. Who knows what he’d do around delicious wedding cake and bridesmaids?! And Jonah… well I think Jonah might be the worst offender. Let’s back track.

Have you seen Brad Pitt lately? Of course you have! He’s been running himself ragged making sure World War Z doesn’t completely bomb at the box office. Have you noticed any major differences? Let’s just say when Brad gets stressed he must not pass on the cookies. He’s been doing some eating… or drinking. That could be some serious wine bloat in the face. Regardless, homeboy needs to hit the treadmill. Maybe Jonah’s his eating buddy. You for god damn sure know Angelina isn’t. Maybe Angelina gets annoyed because when Jonah comes over all the boys end up doing is playing video games over a lunch of cheetos flamin’  hots, oreos and sprite (delicious). That is not the diet you want your husband-to-be on days leading up to your third wedding.

And Brad’s pussy-whipped so he’s basically letting Angelina Jolie ban away to her heart’s content. Don’t lie. You would too.  Poor Jonah Hill. You know he’s crying somewhere now. He’s name-dropped Angie and Brad so many times you’d think he was one of their adopted kids. This could ruin him.