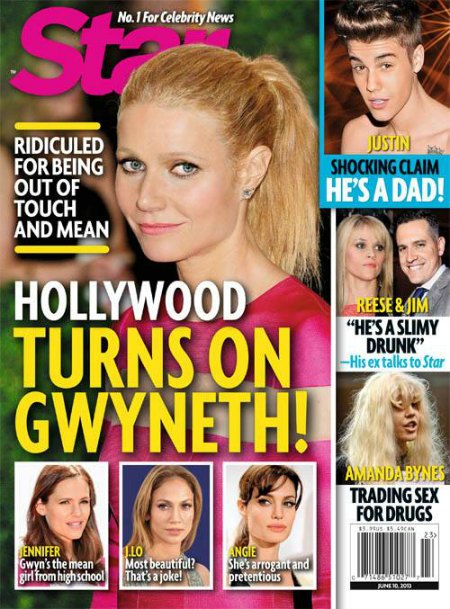 Is anyone surprised that even those in the Hollywood scene would turn on Gwyneth Paltrow?

I can’t say that Gwyneth is a bad actress, because she’s not. I’ve really enjoyed her as Pepper Potts in the Iron Man movies. But, what she really is — is out of touch with the rest of the planet. That is complete FACT. And of course, Brad Pitt’s current partner would pick apart one of his past girlfriends as a pretentious twatwaffle. While Angelina has become an ambassador to places and is helping those much less fortunate, Gwyneth is talking about spending $20,000 to renovate your wardrobe for the summer collection. Yes, $20,000 for one season’s worth of clothing.

It definitely seems arrogant and twisted to offer up recipes to those lower on the totem pole than her, financially, that would cost $500 per meal. Some people make $500 per week if they are lucky, let alone have that much to spend on groceries per month. It’s very pretentious of her to think that people have that kind of cash just to throw away on eating better. If we could, we definitely would.

To say that Gwyneth Paltrow is out of touch, pretentious and arrogant is the understatement of the year, don’t you think? Hit the comments and let us know your thoughts!