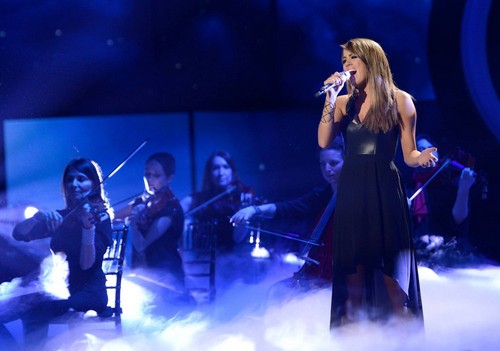 ANGIE MILLER performed “Diamonds by Rihanna for her Top 4 AMERICAN IDOL “NOW Song Choice” performance tonight. Did you watch tonight’s show?  We did and we recapped it here for you. The stakes are high tonight, each of the remaining ladies wants to WOW the judges and the viewers at home, to land a coveted Top 3 spot!

On last week’s show Angie sang for the first round, “Who You Are” by Jessie J.  Mariah said, “she’s standing up in spirit. The caliber of the performance was “beyond”. It was stunning and amazing. Songwriting can give her a career with longevity. Sing an original song at the piano and be inspiring!”  For the second round Angie sang, “Cry Me A River” by Julie London. Mariah said,“it was classic and an elegant number. She’s been holding out on them and it was elegant.”

Check out the video below and let us know what you thought of Angie’s performance tonight? Was it enough for her to stick around another night? Sound out in the comments below and let us know your thoughts.  If you missed Angie’s other song tonight, “Someone To Watch Over Me” the VIDEO IS HERE!