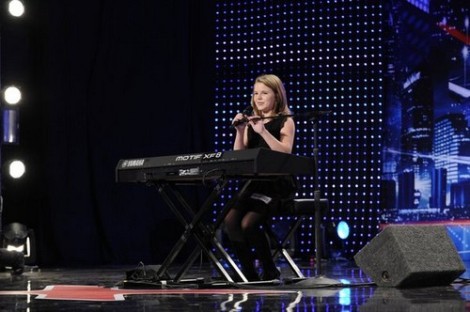 Ten-year-old Anna Christine shut the house down last night as she performed on the season opener of America’s Got Talent. The pint-sized singer and pianist proved once again that you can’t always judge a book by its cover. Sweet and innocent looking with her blond hair and sa hy smile, Anna showed she was a performer to be reckoned with as she launched out a rendition of the Animals’ House of the Rising Sun.

Check out the video below. Pretty amazing, yes? Hard to believe she’s only ten. Howard Stern and Howie Mandel along with new judges, Heidi Klum and Mel B were all left pretty stunned and unanimously agreed to send the young singer on to the next round. It was probably their easiest decision of the night. Howard fell over himself to be the first to admit that the panel found a superstar and Mel B acknowledged she had much more than a great voice but she had depth as well which is something that can’t be taught.  Howie finished off the critique saying she “blew my mind” with her voice that relayed 30 years worth of experience.

I’d say Anna Christine might just be a front-runner this season though I could be blowing my load since it is only the first episode. But the producers had to do something big. Did anyone miss Sharon Osbourne? What did you think of the addition of Heidi and Mel C? All in all the reviews weren’t bad. Many have said the four judges gelled well together and didn’t crowd the panel. Honestly though, how can anyone not like Heidi Klum? It’s scientifically impossible. So will you keep watching? Did Anna Christine give you hope for the kind of talent we’ll see this season?