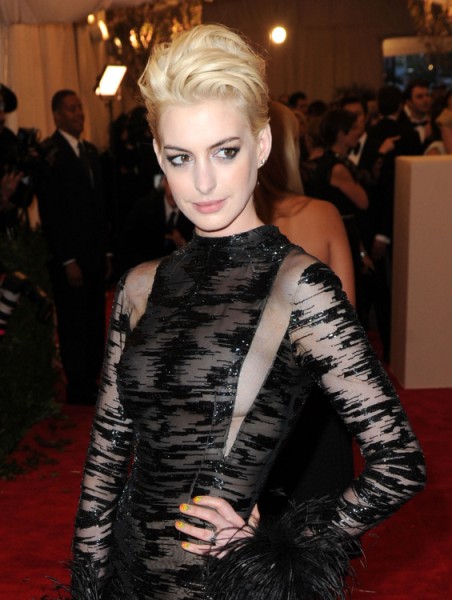 The Amanda Seyfried/Anne Hathaway Valentino Oscar dress affair continues! Many assumed Anne still had her nipples in a twist after Amanda played “bitch stole my look” before the Oscar ceremony a few months back but sources say Anne confronted Amanda at the Met Ball on Sunday night and it wasn’t the blood bath everyone expected. Not very punk, right? Anne should have got all Johnny Rotten on Amanda’s ass!

According to Us Weekly Anne ran up to Amanda and gave her a huge hug and kiss on the lips before chatting intensely. The two eventually parted to dance but left on cordial terms. So anti-climactic, right? Perhaps it would have been less so if Amanda would have worn Valentino at the Met Ball but she showed up in Givenchy instead. Anne now only showed up in Valentino but she showed up with him as well which means her little apology letter after wearing Prada to the Oscars must have worked on the designer.

Anne probably just realized that you can’t stay mad at Amanda Seyfried for long. She’s like an adorable puppy that pisses on the floor the second you bring it home from the pound. It honestly doesn’t know any better. I get the feeling Amanda is flying blind most of the time not so much because she’s a dumb ass but because she’s just a major space cadet. Besides, that’s all Anne Hathaway’s image needed – a fight with doe-eyed Amanda Seyfried. Anne’s played it cool lately. She’s let the hate subside and kept a low profile. She’s almost in the clear which is good considering she got majorly shit  on during the campaign season. The girl needs some upswing.

Do you think Anne has truly forgiven Amanda for the Oscar dress fiasco or was this reconciliation just for show? It seemed a bit over the top but isn’t that Anne Hathaway?