Anne Hathaway’s Oscar Campaign For Les Miserables: Is She Really THAT Disgusting? 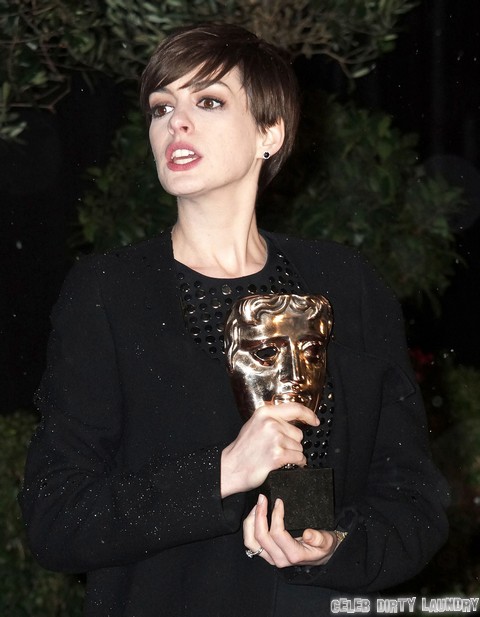 Anne Hathaway’s always been a commercial and critical darling, and she’s considered by many to be the successor to Julia Roberts and Sandra Bullock for the title of ‘America’s Sweetheart’. However, Anne’s recent Oscar campaign has left a lot of fans fuming, and one has to wonder what caused such a huge backlash.

Anne’s always been somewhat of a polarizing figure in the media, but she always goes out of her way to be kind and appreciative of her fans, her friends, and her co-workers. She’s always had a very strong reputation in the industry, and she’s pretty much the closest thing to a lock for this year’s Oscars as there is.

So why all the Anne-bashing? Well, a lot of the public finds her to be overly gushing – and she’s not alone in this as Natalie Portman received a similar kind of fan backlash when she was running a sure-fire Oscar campaign back when she was nominated for Black Swan. Her speeches all have that breathy ‘Oh my god, I can’t believe I won’ quality, but please – she knew she was going to win every single one of those awards, and it’s possible to be appreciative without managing to turn everything into an overly emotional, teary speech [see: Jennifer Lawrence and Jessica Chastain].

There are also mixed views on her paparazzi flashing incident – some believe it was an accident, but others believe that it was a calculated effort to gain sympathy and publicity for the opening of Les Miserables. Oscar voters are also, for the most part, old white men who like their actresses to show skin whenever possible [further proof of this – ‘sexy’ actresses have a much better chance of winning than the ones with a more demure image]. There were definitely a lot of people who found both the incident and her apology to be a clear set-up, and it started to cause the swell of backlash that has swept into award season now.

This carried over into her Golden Globes win – not only did she steal away the producers mic to thank her own agents when it wasn’t her turn to speak, she then proceeded to hug a clearly uncomfortable Amanda Seyfried throughout the entirety of that same speech.

Despite all this, it’s clear that whatever else, she very desperately wants that Oscar – and she deserves it. If not for her campaign, but for her brilliant performance in Les Miserables. Because even with all the backlash against her behavior and the way she carries herself publicly, no one can deny that the woman can ACT. So while the backlash may be borne out of irritation and overexposure, it’s not really unfair to say that most actresses face it at one point or another in their careers. Of course, you may use Jennifer Lawrence and Jessica Chastain as excuses for this not always being the case, but we haven’t really seen them at the peak of their career yet, have we? Don’t forget, when Anne first started out in the Princess Diaries and then moved onto movies such as the Devil Wears Prada and Rachel Getting Married, the love for her then was nearly unanimous, too. It just seems to be a sad fact of Hollywood that most actors and actresses will eventually get on your nerve.

Editors Note: The author mentions something about ‘old white men’ preferring ‘their’ actresses to show skin and be ‘sexy.’  Well I haven’t noticed that white men, old or young, favor ‘sexy’ women showing skin more than men of any other color.  Have you?  Additionally, if Anne Hathaway has to rely on looking sexy to win an Oscar then she might was well stay home.