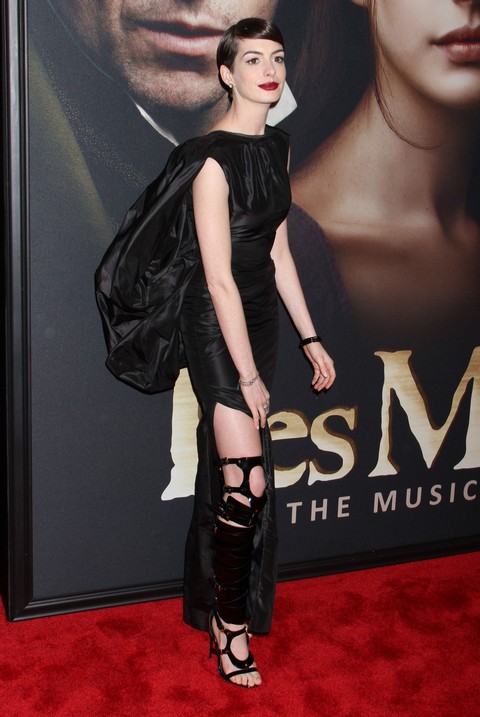 There seems to be two factions when it comes to public opinion on Anne Hathaway – love her or hate her. Okay three – I’m sure there’s another set that either hasn’t heard of her (cave dwellers) or doesn’t give a tinker’s damn. I’ll admit I’m in the “could care less” category except when she does something particularly cringe worthy and then I move firmly into the hate her clique.

Let’s be real, haters gonna hate, but when Anne brings it on herself, summons it like Lord Voldemort drawing on the dark forces, you can’t even feel sorry for her when the vitriol begins to spew from her anti-fans.

I was enjoying the Golden Globes Sunday last – I truly was. Tina Fey and Amy Poehler were hilarious. The awards were going largely as I predicted to my smug satisfaction and then came the award for Best Supporting Actress in a Musical or Comedy. The nominees were from starkly different films and I was really hoping for a win for Sally Field.

But no, it was Anne Hathaway. I understand she starved herself into desperate near-Auschwitzian thinness to play Fantine, but isn’t that what all actresses do? Not eating is a way of life in H-wood, not an expression of art. Oh and she shaved her head. So did Demi Moore in GI Jane and she didn’t get a Golden Globe. But then again she sucks even more than Anne Hathaway. I digress…

It doesn’t bode well when you’re getting an award from Jonah Hill (the antithesis of a thin actor) and Megan Fox (the antithesis of talented actor) but they announced it and she came to collect her award. And she seemed so surprised to be getting it – but then again she is an actress. And then she launched into the speech – that irksome, insincere speech. Anne said, “Thank you very much for this lovely blunt object that I will forevermore use as a weapon against self doubt.”

After her speech, I wanted to use that blunt object as a weapon against her obviously prepared “impromptu” speech. It was so artless and then triggered a tsunami of twitter hatred. I didn’t tweet my derision, but I certainly crafted some biting criticism that I found I was too apathetic to post once Tina and Amy resumed their amusing antics.

Yet now Star magazine is reporting that sexless screen droid Anne Hathaway is already rehearsing her Oscar acceptance speech. Star quotes a purported friend of the actress saying, “She’s so sure she’ll win that she’s working with a team of writers to compose a ‘killer’ acceptance speech.”

Are these the same stellar writers that crafted her Golden Globes monstrosity? I think she should just go with a dirty limerick or better yet have a Native American protestor decline it on her behalf. Anything to avoid her faux modesty. I would even be more open to undisguised hubris than the display she put on.

I would rather listen to five more rambling and random Jodie Foster sermons than 30 more seconds of Anne Hathaway acting surprised and humble while saying she now has no more need of self-doubt now that she’s got a statuette. I guess it’s okay to take that out of her actor’s toolbox – she has so much more in her arsenal…

So here’s my alternate proposition Anne. Fire the speech writers that Star is certain you have scribbling furiously away on your acceptance speech for the award you are so totally not sure you are getting. If you win, just go up onstage and part the fold of your designer gown and give your lady bits another crack at the limelight. Everyone was much more interested in seeing your wardrobe malfunction than anything you have to say.

If you’re a classic movie lover, check out a little 1977 film called Chatterbox! It’s a mildly amusing movie about a woman who’s vadge has a voice of its own. Please Anne, let this cinematic jewel inspire you to let your nethers do the talking and you just do the walking. I’ll take a queef over another of your speeches any day… 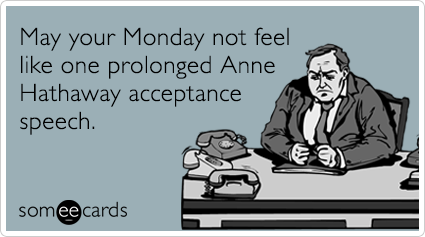