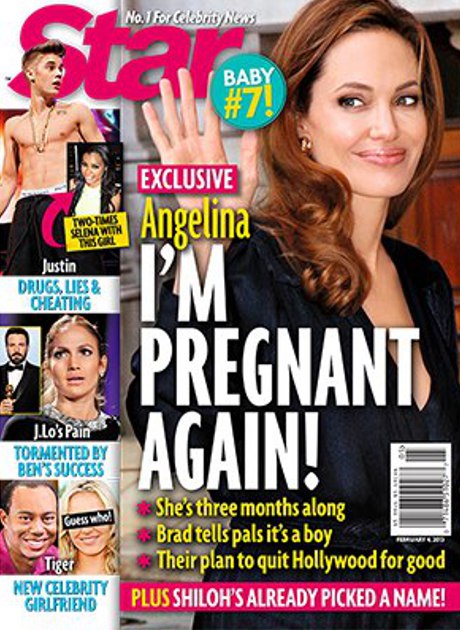 Angelina Jolie is pregnant with a baby, and Brad Pitt has been rambling on and on to his pals about how the new little addition to his family will be a boy. Brad and Angie are truly going to have a full time job cut out for them, so maybe it’s a good thing they’re considering quitting the Hollywood game to put their family first.

Honestly, I don’t ever see Brad Pitt and Angelina Jolie completely giving up Hollywood forever. They lead an extremely rich lifestyle and with all those kids they might never be able to stop working. Though, I supposed if you’re two of the world’s richest and most famous celebs then, well, you’d probably A-OK with retiring a few years early.

Hmm, wonder what on earth Shiloh has in mind for the new brother? I’m a big fan of wild-crazy-nonsensical celeb names, so I hope very much that Shiloh chose something completely and utterly ridiculous. Because Angie and Brad seem like the type of people who’d say, “All right, sweetie, you get to name your new baby brother anything you want. Anything in the world.” So I hope they name him Cupcake Sprinkles Delicious Jolie Pitt — or something along those lines.

Perhaps we should have a naming contest in the comments section below? Tell me your dream name for Angie’s new baby at the bottom of this post. No prize. Just eternal celeb-baby-naming glory. I will also send you a telepathic hug.

Also in this issue of Star Mag: Justin Bieber’s secret world of drugs, sex, and lies — OH MY! Honestly, it’s about time Bieber found himself in this pot of hot water. For a while he was one of those popstars who seemed to be immune from bad press, but I guess now that he’s an adult he’s stepped into new territory. Wonder how he’s handling it? Check out this week’s edition of Star for the full story.

Oh, and there’s also some stuff in their about Jennifer Lopez. Meh.