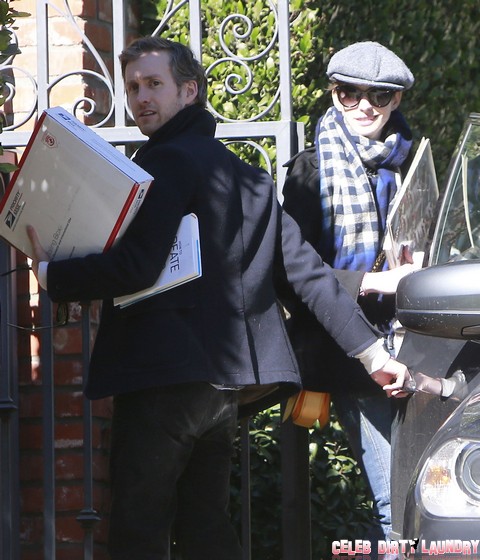 Is a certain Golden Globe winner pregnant?  Does little Miss Anne Hathaway have a bun in her oven?  Anne’s publicist/rep, as reported by Page Six, has said that the award winner is NOT pregnant, but how many celebrities do you know have a publicist that tells the truth?  Exactly.

Since the announcement was made that Anne would be starring as Fantine, the celeb has been making a big name for herself… not to mention the movie.  She made headlines when she lost massive amounts of weight for her role in Les Miserables.  She made headlines again with her exquisite performance in the movie.  Of course, what is a young female celebrity without giving the public a little something extra.  After the actress flashed her snatch at the movie’s premiere she garnered a few new fans.  Something that I’m sure helped bring in moviegoers and boost ticket sales.  Every young starlet needs the “accidental” crotch shot to maximize exposure of their film, right?

So, is Anne Hathaway pregnant?  If she is, was this timed perfectly to coincide with awards season?  Is an awards season pregnancy the ultimate good luck charm as referenced by Page Six?  It worked for Rachel Weisz, Natalie Portman, Claire Danes and Catherin Zeta-Jones, so maybe it is good luck.  At this point, we’ll just have to wait and see since there is no way we will get an honest answer.

I am undecided on this.  On one hand I can see her getting pregnant just to help increase her odds of winning.  On the other hand, she doesn’t seem the type to get pregnant at this stage in her career.  If I were her, I would wait at least two years after the wedding to get pregnant.  If her past relationships are any indication of her bad judgment in men, she’d be wise to make sure this guy is gonna stick around.

What do you think readers?  Pregnant?  Not pregnant?  Do you believe the pregnancy good luck myth?