BY Roberta Ferguson on May 15, 2013 | Comments: one comment
Related : National Enquirer, Tabloid Wednesday 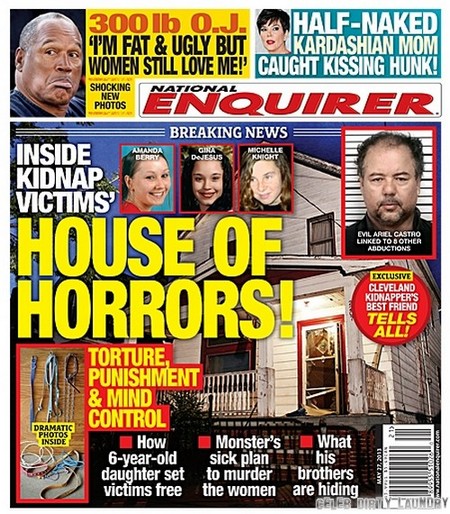 Cleveland, Ohio monster and captor of three missing girls, Ariel Castro, is featured on the cover of the latest issue of the National Enquirer. It’s a sick and twisted tale of how this monster kept Amanda Berry, Michelle Knight and Gina DeJesus tied up in that house for a decade before they were able to finally make their escape.

Last week, with the assistance of two neighbors, Amanda, her daughter Jocelyn, Gina and Michelle were finally able to step outside of 2207 Seymour Avenue and into a world which gladly welcomed them with open arms.

The house that contained them was mostly shut off from the rest of the world. Family members said that Ariel kept them out of certain parts of the house with locks. Neighbors called him a regular guy who did regular stuff around the neighborhood. No one suspected that he had three girls chained up in his house of whom he repeatedly raped and beaten.

The tabloid reports that Ariel could’ve possibly planned on murdering the girls and talks about how Jocelyn set the victims free. Also, in an exclusive interview, Ariel’s best friend is telling all!