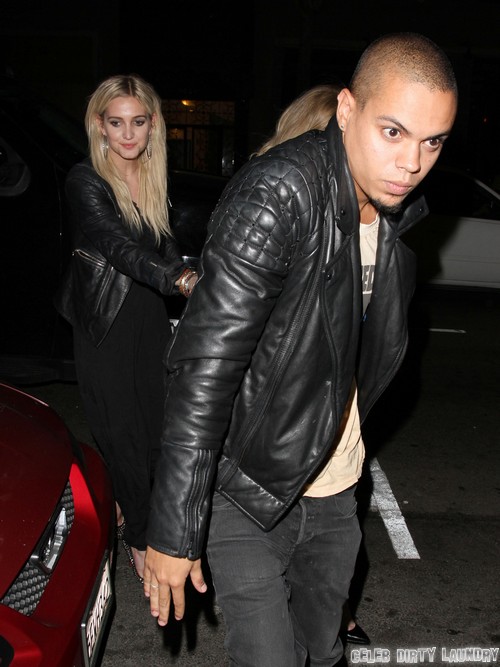 28-year-old Ashlee Simpson is dating 25-year-old Evan Ross, and she reportedly has started taking the next steps in their relationship by introducing Evan to her father, Joe Simpson.

A source tells Life & Style Magazine that at Evan’s 25th birthday party in Malibu, “Ashlee and Joe arrived around 3:30 p.m. Joe and Evan greeted one another with a hand shake. It was a formal hello and looked like it was the first time they were meeting. Joe told him ‘Happy Birthday.’“

The source also adds that despite the presence of her father, Ashlee and Evan were inseparable and very touchy during the event. The source adds, “They were very touchy-feely — and right in front of Joe! Ashley was sitting on Evan’s lap and at one point she leaned over and whispered in his ear. They disappeared from the group for a little bit. They were holding hands throughout the night and at one point, Ashlee came out out on the balcony asking the guests where Evan was. She wanted to be with him every second!”

I’m surprised she felt so at ease with a new boyfriend in front of her father, especially after just introducing him. Then again, it was Evan’s birthday, not Ashlee’s or her father’s. Ashlee has also already met Evan’s family when he introduced her to his mom earlier in August, and it’s now been several months since Evan and Ashlee started dating [the couple was originally spotted towards the beginning of July].

While that still seems early for a Hollywood couple, we know how fast most of them tend to move, so I wouldn’t be surprised if I hear about a marriage by the end of this year. But she might also end up being more careful this time around, especially with what happened in her last marriage.

What do you guys think about Ashlee’s new boyfriend? Let us know your thoughts in the comments.