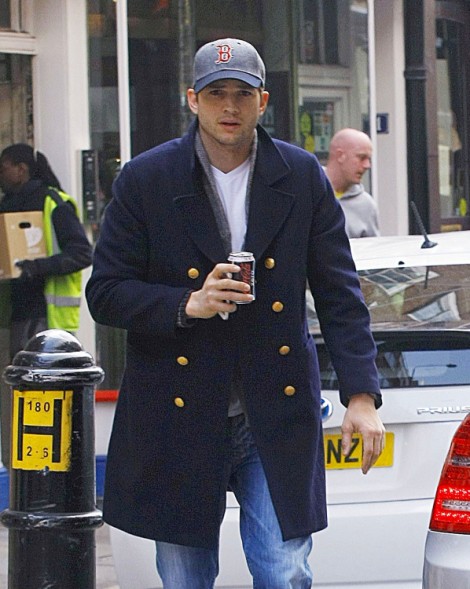 It wasn’t all peace, love and harmony this weekend at Stagecoach Music Festival. Ashton Kutcher got in a major bitch brawl with a security guard when the overzealous dude got a little too physical with a fan for Ashton’s liking.

It all started when a woman came forward to meet Ashton and shake his hand. He actually agreed but a security guard didn’t approve and shoved the two when Ashton went to greet the woman. According to TMZ, Ashton got pissy back and started freaking  out at the guard and they got into a shoving match. Although sources report Ashton’s friends had to reign him in, TMZ was told he was not the aggressor. The guard wanted him ejected from the festival but he left on his own.

Ashton left girlfriend, Mila Kunis, in London so he could attend the Indio, CA concerts and was there that day to watch Nick 13 and Dwight Yoakam in particular. Strike me down dead (you know I like to point out Ashton’s douchery as much as possible) but I think he was actually being a good dude here. The security guard was the one who let his job get to his head on this one. I get it can be a stressful job and you need to keep a tight ship at those festivals but homeboy was guarding the VIP area for crying out loud! There’s no need for all that stringency especially since Ashton was cool with letting the fan meet him. I can’t believe I’m defending Ashton Kucher! Everyone has their good days I guess! He’s got a little temper though, doesn’t he? But it was all in the name of chivalry… or he could have been a little tipsy and just got pissed when a commoner deigned to touch him. It really all depends on what mood I’m in – let’s go with chivalric today.

What do you think of the Ashton Kutcher fight? Did he overreact or was he right on to freak out at the security guard?