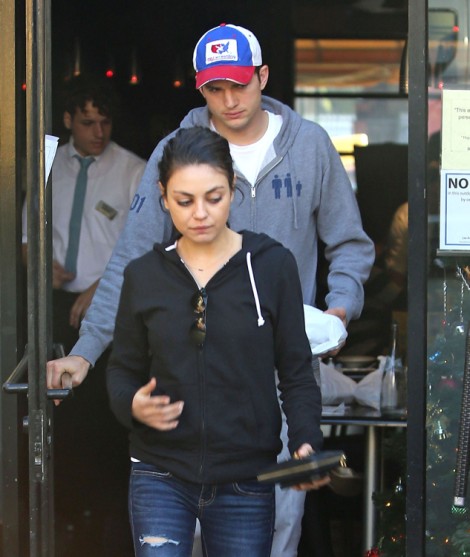 Ashton Kutcher and Mila Kunis are taking their love on the road and currently house hunting in London. Mila is set to spend 6 months there filming the Wachowski brothers’ new movie, Jupiter Ascending, beginning sometime this spring. According to The Sun, Ashton and Mila have already been spotted in the Marylebone area where Kate Hudson and Guy Ritchie also happen to live. Why is Ashton there, you ask? I asked that too – today and everyday but, apparently, a source told the newspaper that Ashton is practically glued to Mila’s side of late and, since he has no movies coming up, can spend all his time with his new… wife?

That’s right. I said it. Wife. If the Wachowski movie starts filming this spring then it will be perfect timing for that April wedding in LA we keep hearing about. I’m telling you. I’m sensing it. I love to call bullshit on silly stories but I’m choosing to believe Mila Kunis is engaged. Maybe it’s because of Ashton’s new hard line stance on his divorce from Demi Moore or that Mila’s spent time with his family or the simple fact that he can’t get anyone better and wants to lock her down before she wakes the hell up but Ashton and Mila should, unfortunately, be taken seriously.

Because, really, even if no wedding goes down, a couple that lives together while someone is shooting is a couple intent on making it work. And this is the last movie Mila’s got scheduled at the present. She’s been non-stop over the last couple of years. Her calendar looks wide open after this is wrapped. So what makes more sense to you – wedding before filming, baby after or wedding and baby after? I’m telling you… Ashton’s chomping at the bit to tie her down.

Are Ashton Kutcher and Mila Kunis moving together as man and wife in the spring? Is this just wishful (or not so wishful) gossip thinking on my part or is the timing starting to make a believer out of you too?