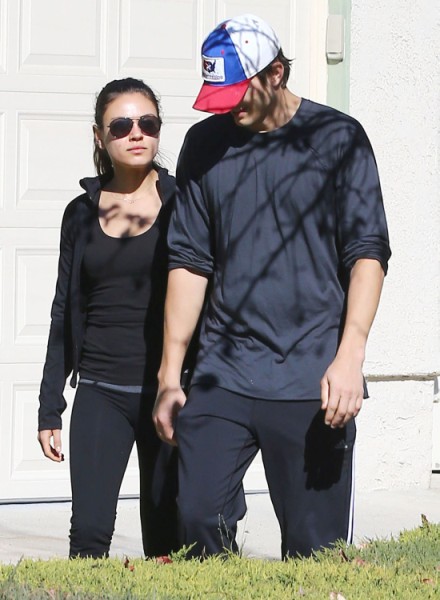 Ashton Kutcher and Mila Kunis have been relatively quiet lately. While Demi Moore’s been caking herself with mud on the beach these two have kept their relationship mysteriously hidden with very few public outings. Don’t give me that Ashton Kutcher likes to keep his private life private nonsense either. Remember these pics? So what’s the deal? Could all that divorce/wedding/baby talk be on the money? It is if you believe recent stories. It turns out Ashton and Mila might be keeping things extra cool because they’re planning a small, intimate ceremony for April in LA. Apparently the whole Christmas with the family in Iowa was a way to break the happy news to his family. This all is contingent upon Demi cutting the cord and agreeing to the divorce but, if the timing of Ashton’s filing means anything, I’d guess he’s all business at this point.

I know. I know. Another Ashton Kutcher and Mila Kunis married story. How is this any different than the rest? I’m totally with you. However, there could be some clues. Ashton and Mila were just papped hiking this weekend in LA. Some are scratching their heads at why he’s there. Sundance Film Festival opened last Thursday and it runs until next Sunday. Ashton has a major comeback debuting there. His new film, Jobs, is the festival’s closing night film and it doesn’t look like Ashton’s going to make an appearance which seems odd to me. Now, who knows, Ashton has plenty of time to jump on a plan and get to Utah for the premiere and some interviews but I can’t find evidence of that happening anywhere. It might be because the film has already been bought by Open Road so Ashton doesn’t feel he needs to do any selling. It’s just weird and should be noted. Even crusty Kristen Stewart shows up for Sundance events and one might argue Ashton’s movie career needs this film to do well more than anyone else in the business right now. Face time wouldn’t hurt. Can he just not get away from Mila? Can he just not get away from his divorce lawyers? Or is (God forbid) Two and a Half Men too demanding? Something interesting’s coming! I can feel it! Is Mila Kunis planning a wedding?