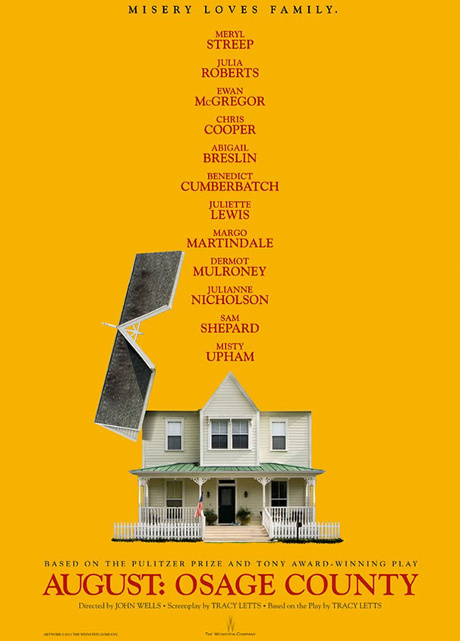 The second trailer for August: Osage County is a lot more in line with the tone of the play than the first trailer, thank goodness. When it was first announced that the Pulitzer prize winning play by Tracy Letts was going to be made into a film, the responses bordered on trepidation. After all, when does a movie ever do justice to its original form?

However, when it was reported that Letts himself would be the one doing the adapting, there were higher hopes for the film. And that soared when the cast was announced – and my, what a cast. Meryl Streep, Julia Roberts, Benedict Cumberbatch, Abigail Breslin, Juliette Lewis, Margo Martindale, and Chris Cooper.

The film has already screened at the Toronto film festival, but apparently it’s not a locked cut. The performances were all strongly reviewed across the board, but many critics noted that the film was uneven and the movie itself never lived up to its full potential. With a cast like this, it should be knocking everyone out of the part, not merely eliciting a decent response.

Anyway, the second trailer for the film has now released, a few months ahead of the film’s release. It makes sure to highlight the cast, but the one notable difference between the first and second trailer is that this one focuses a lot more on Meryl Streep and more on the snark. Considering that the dialogue was one of the highlights of the play, this is a smart decision. It also features the skewed family dynamic present in the story, and you can definitely see more than a hint of that in the trailer.

Will you guys be watching August: Osage County when it comes out in theaters? Let us know your thoughts in the comments.