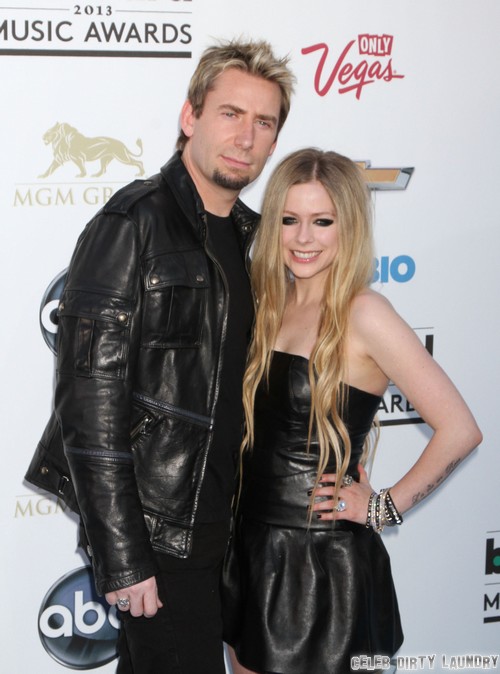 Avril Lavigne and Chad Kroeger were married today in the south of France. One of her reps let it slip today on twitter. A couple has decided to get married after only being engaged for a year, congrats. Certain celebs are engaged for several years before they can drag a loved one down the aisle. So what was Avril and Chad’s magic formula? Does it have anything to do with constant pregnancy rumors.

The bride already has a marriage under her belt but still appeared excited in discussing her marriage plans at the last Billboards awards. E!Online has her quoted with “We want it to be unique and special and we want it to be a very big event but at the same time it’s small and it’s just close friends and close family”. Not sure  the CEO of your talent company should be consider a close friend. After all he did just announce their plans to all twitterdom. If he’s still close after that then yes do tell him about any upcoming 12 weeks scan.

I’ve certainly enjoyed the guessing game with all off her drape dresses. Because it couldn’t have been the wind all the time. Hell if she had to drape then she must be further along than anyone’s guessing. Did she have to wear an empire wedding dress? Hmm.

Chad our lovely and forgotten groom happens to be 10 years older than his once wild child of a bride. Rumor has it that he was the one to help Avril grow up out of her bratty stage (never did forgive her diss on Kelly Clarkson). Yet how will he feel with the possibility of  raising two kids now? Let’s not forget they’re supposed to be Rockers. Chad had enough time to get it out of his system but did Avril have the same opportunity? Either way its too late now.