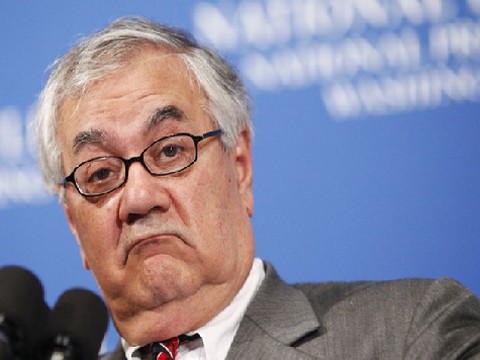 Smack in the middle of any tragedy you’ll always find at least one idiot, in this case Barney Frank, who needs to speak out just for the sake of having an opportunity to be heard in a self-serving manner. As America grapples with the Boston Marathon Terrorist Bombing and law enforcement keeps key cities on high alert, former Congressman, Barney Frank (D-Mass), just needed to throw his two cents in to the media pile.

You would think that someone who had served in a congressional district near Boston for nearly 30 years would have a connection to the area and people that have been deeply affected and afflicted by yesterday’s terrorist attack. Instead he chose to speak out this morning to talk about fighting tax cuts. His rhetoric was so painfully obvious that even the MSNBC anchor dealing with him asked why on earth he would take a crisis situation and turn it into a money-making politically motivated venture!

The most tactless quote of the day will likely come from Frank, who when referring to the tragedy said, “Look, it’s not the end of the world.”

While that statement might be absolutely true this is not the time to make it. Not while the U.S. Government still appears to have no idea of what really happened or who might be responsible. Certainly not while 176 people are still in the hospital and 8 of those are in medically induced coma’s. It may not be the end of the world, but the world as many major U.S. Cities know it to be is most definitely altered today. Increased security, heightened awareness while traveling and random bag searches may not be the end of the world, but they certainly are reminding us that we are vulnerable. That’s something that in the 11 years since 9/11 many American’s in the middle of the country have conveniently forgotten.

Should Frank have even been allowed to have a forum for his political agenda at a time like this? Tell us your thoughts in the comments below!