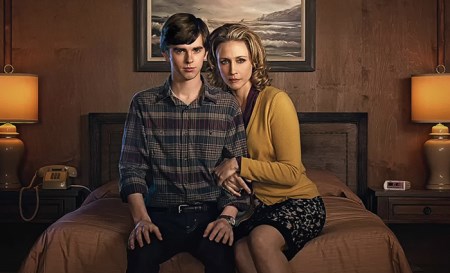 Tonight Norman Bates in Bates Motel airs again on A&E. This is the sixth episode of the series that was inspired by Alfred Hitchcock’s Psycho that focuses on the life of Norman Bates (Freddie Highmore) and his mother Norma (Vera Farmiga).

The highlight of last week’s episode “Ocean View” was when Norman spent the night in Bradley’s bed and when he returned home in the morning found out that Norma had been arrested. Norman ended up posting mommy’s bail by putting up the deed to the motel. Dylan got more and more worried about Norma’s influence on Norman and tried to convince him to move in with him when he moves out and finds his own place. Dylan was in need of cash and borrowed from a co-worker that ended up getting shot from a drug addict in front of Dylan. Norman confided in Norma about his sleeping with Bradley and about the girl that Deputy Shelby had locked in his house. Dylan is furious at the drug dealer for shooting his co-worker Ethan and runs him over. Norman with Emma, rescues the girl and brings her to the hotel, Norma is disgusted with Deputy Shelby.

Tonight’s fifth episode is called “The Truth” and Dylan pushes for Norman to move in with him while there is plenty of chaos at the Bates home and Norman tells Emma that some things are better kept to themselves. You won’t want to miss this Episode, Norma and Norman both have injuries in the promo photos and Dylan has a gun, it will definitely be interesting to see how all this plays out.