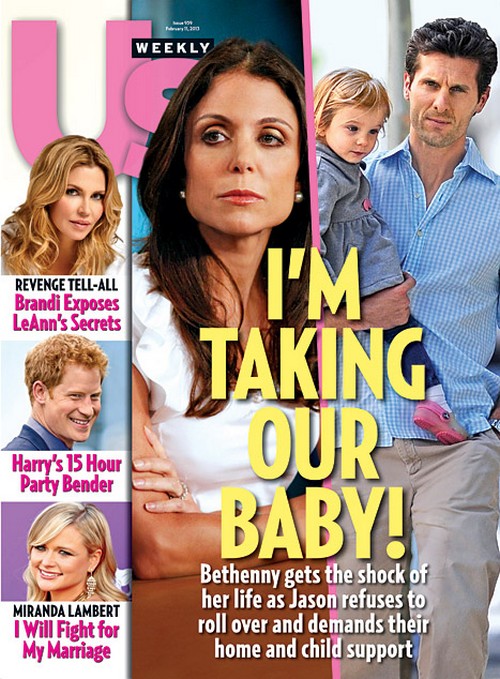 I wonder if when filing for divorce Bethenny Frankel ever imagined that things would get this ugly. Her marriage was reportedly a mess since last spring at least and whenever she and Jason Hoppy were photographed in public neither of them looked like it was a bearable excursion. It was pretty obvious they were headed for a split but I wonder if Bethenny just thought that she would walk away with her home, her baby and move on. Last week Jason filed court documents proving that he is a lot tougher and has more of a back bone than many anyone realized.

According to the new issue of US Weekly Jason wants custody of two-year old Bryn, child support and he is gunning for the home the couple shared as well. The thing is, Bethenny is admittedly married to her career and Jason has been an extremely hands on father to Bryn. He really could walk away with custody of their daughter!

Also in the latest issue is an inside peek at Brandi Glanville’s new book that takes a candid look at her life and how her marriage fell apart. Expect fireworks because rumor has it that by the final chapter Brandi has fully succeeded in making Eddie Cibrian look like a major dirt bag and his now-wife LeAnn Rimes look like an insecure, desperate home wrecker.

Are there problems in Miranda Lambert and Blake Shelton’s marriage? Well rumor has it they aren’t spending much time together due to career obligations and that’s taking a toll. Miranda also worries about Blake’s drinking and being surrounded by women. As she should be! He was married to someone else when fate supposedly intervened and put them together. US has all the details on how Miranda is fighting to keep her marriage on a good track! Pick up the latest issue for these inside stories and more!