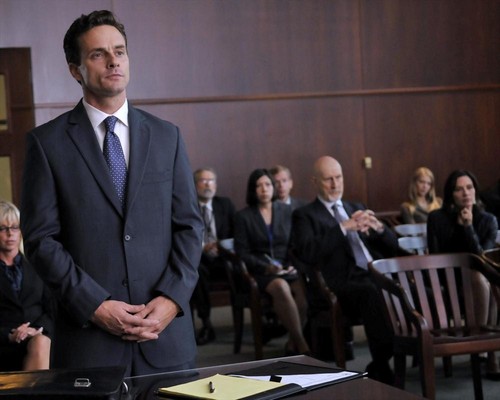 Tonight on ABC their sensual and gripping new drama BETRAYAL continues with a new episode.  On tonight’s show called, “If you want the fruit…” Sara and Jack fight their feelings for one another, and Drew is consumed by the murder case.  Did you watch last week’s episode?  We did and we recapped it right here for you.

On last week’s show still reeling from the discovery of who Jack really is, Sara decided to recommit herself to her marriage. Meanwhile, Jack came face to face with Sara’s husband, Drew, in the murder investigation that had shaken the Karsten family to its core.

On tonight’s show hot, heart-racing fantasies throw Sara off balance as she attempts to resist the powerful pull of her affair with Jack. As Drew tries to get to the bottom of Lou’s murder, he has a heated face off against Jack in court for T.J.’s bail hearing. Reeling from her husband’s death, Connie fears for her own life, and with good reason. Meanwhile, Thatcher tangles with Jack about past recriminations and guilt surrounding T.J.’s car accident years ago.

Tonight’s episode is going to be another great episode, which you won’t want to miss. So be sure to tune in for our live coverage of ABC’s Betrayal Season 1 episode 3 — tonight at 10PM EST! While you wait for our recap, hit the comments and let us know how excited you are about the return of Betrayal tonight.  Check out the sneak peek video below!

Sara is truly doing her best to get over Jack. By doing her best, she’s actually doing herself with the wet dreams she’s been having. She tries to throw herself into her family during the waking hours but that doesn’t’ do any good. All her husband can talk about is his big important case. She attempts to occupy herself with work and all she gets is frustration.

So caught up researching her new piece titled “Obsession” she’s actually become obsessed. Everywhere she turns she sees Jack. The regular work she does isn’t helping either. An art gallery owner called her work commercial. That’s a death nail in her business but luckily others have faith in her.

Jack has been too busy to think a lot over Sara. He has to get TJ out of jail but nothing is working for him right now. He has to keep Elaine away from asking too many questions, a problem in itself, and he has tofigure what the new IT girl has been trying to tell him all day.

First thing first is Elains. She keeps talking to him about distancing their family away from her dad. Never mind her husband works for him and her dad is the chief backer in her exploits. All she sees is a stern man that refuse to acknowledge his son is “special” to the point he allowed TJ to enter to public population.

Then there is her aunt Connie complaining about being threatened to keep quiet and having to be stuck inside of her house with a police guard. Don’t know why Elaine is still talking to the chief witness against her brother but she is and she manages to sympathize with her. She gets so wrapped up in a fight against her father that she never knew her kids were getting bullied about their family at school.

No instead she drags her kids along as she goes to confront daddy dearest. What she finds is that Jack has been in on everything from the beginning. They did “talk” to Connie. Thatcher was the one that threatened not that he’ll reveal that to the kids. Elaine was close to expressing her disappointment with the both of them when the lights in the building go out. The IT girl should have been listened to earlier. Someone had sent a worm into their main system. She fixes but her powers served to impress both Jack and his daughter, Valerie.

Those two ladies have something happening there. That could be good just in case the girl turns out to be a future daughter-in-law. She already proven herself useful. She fixed the building and looked into someone’s financial records. Thanks to her Jack has come up with another suspect in Lou’s murder. His business partner was skimming money off of Thatcher as well.

Not that it will convince his wife. She was with Connie when Connie’s car blew up. Of course she going to suspect her family for it.

Jack’s son was in a fight at school. Jack doesn’t want Victor to learn to meet violence with more violence. Thatcher feels Jack was going too easy on the boy so he took over. He’s teaching Victor how to box. Feels it will toughen him up.

Drew is loving the idea of a car bomb. He now has more things he can’t wait to pin on the Karsten family. He has the DA sign off it and all he has left to worry about is removing the widow into protective custody. She’s stubborn though. She wants a day to say goodbye to her family.

In their off time, they each think about each other but real life always intervenes. Sara can’t get attention from her husband and Jack can’t find out where all of the company’s money went. That is until he’s informed by his newest Robin to his Batman that Connie was speaking to Lou’s business partner after Lou’s death.

Lou wasn’t skimming. It was Connie. The very same Connie that isn’t going into witness protection. She’s fleeing the country with money she stole from Thatcher. The car bomb Drew was so happy about was a set-up as well. Connie needed to be able to move freely and Elaine helped. Elaine did it to get rid of the only witness against TJ. In the end, everyone wins.

Sara comes clean to boss and friend, Alissa. She admits to her affair. Not as she would have a couple of days ago in a way expressing shame. She speaks about her affair in excitement.

Sara meets Jack on the bridge. She’s ready for Round 2.