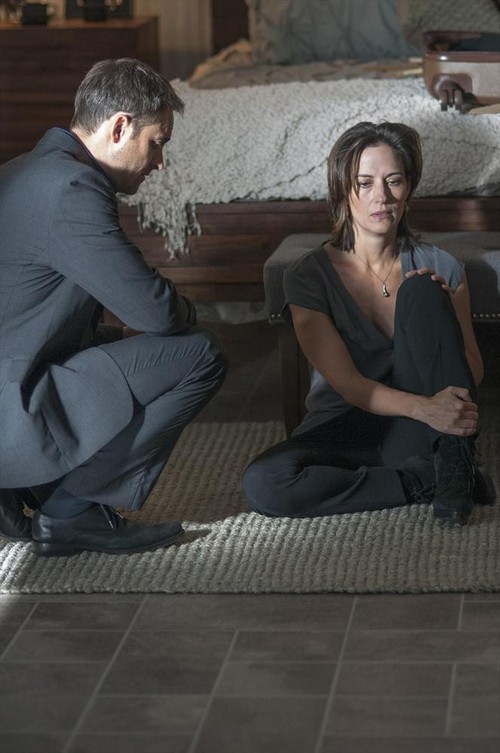 Tonight on ABC their sensual and gripping new drama BETRAYAL continues with a new episode.  On tonight’s show called, “…We’re not going to Bailey’s Harbor” Sara and Jack deal with the devastating repercussions of their secret being revealed.  Did you watch last week’s episode?  We did and we recapped it right here for you.

On last week’s show Sara’s concern about Jack’s and her relationship being exposed intensified. Jack made a difficult confession that left him vulnerable and exposed, but brought him closer to Sara than ever. Meanwhile, Drew obsessively tried to find out what his wife had been up to.

On tonight’s show neither Sara nor Jack’s families will ever be the same after Drew’s discovery of the affair. As Sara and Jack attempt to navigate their newly fractured relationships with their spouses and children, Elaine seeks support from an unlikely source. Meanwhile, a despondent Drew discovers information that could reopen Lou Mrozek‘s murder investigation, and Zarek, anxious to please Karsten, resorts to drastic measures to deal with Brandy.

Tonight’s episode is going to be another great episode, which you won’t want to miss. So be sure to tune in for our live coverage of ABC’s Betrayal Season 1 episode 7 — tonight at 10PM EST! While you wait for our recap, hit the comments and let us know how excited you are about the return of Betrayal tonight.  Check out the sneak peek video below!

Soon after learning the truth, Drew isn’t willing to bury anything. He’s mad and his wife is going to know how much. Sara had returned from work with Drew pretending things are still normal. He did that to catch her in a lie. The moment he did he went in for the kill. There isn’t a thing Sara can say to defend herself. She was having an affair and kept trying to cover it up. He kicks her out of the house despite all her pleas that it would affect their son. He simply can’t stand for her to sleep under the same roof as him.

She leaves and immediately goes to meet Jack. He offers to stay with her for the night but she doesn’t take him up on it. She needs to be alone right now.

Jack meanwhile goes home to his wife. He had the perfect opening to tell Elaine about his own affair but instead told her he quit the family company. After that he didn’t want to bust her happy bubble. She’s wanted him to quit for years now. She figured they’d be happier from out of her father’s thumb.

By the next morning, Sara is back. She let herself in and got her son prepared for school. Drew can’t say a word. He knows is son had a rough night after his mother left. Having her there made his kid feel better. So he bit his tongue. He has another idea anyhow.

Elaine had stopped her at work flirtation. She knew it was getting out of hand and wasn’t willing to risk her marriage over it. Just as she made that wise decision though Drew decided to pay her a visit. He at first says he wanted to apologize the case had gotten so ugly. But he couldn’t resist the golden opportunity. He turned around to tell her something else. Back at the office when he sees Jack, he could help taunting the other man with what he may or may not have said to Elaine today.

Drew wanted to be spiteful. He’s getting sidelined at work and his marriage may very well be over. Yet he didn’t tell Elaine about the affair. He scared Jack so bad that he ended up doing it himself. Jack doesn’t ask for forgiveness and tells a lot on its own. Elaine knows Jack is in love with this other woman. Then she learns the picture she’s been walking by every day is Sara’s piece. Not surprisingly she destroys it.

Sara needed someone to listen and felt her estranged sister would be best. She hadn’t spoken to her sister since the other came out of rehab but she was still expecting sympathy. She didn’t get any. The other woman said she was being reckless. Her sister had been in a similar position and so she knows that people will never forgive Sara for her actions. That’s why she can’t be a cheerleader for Sara’s self-destruction.

Elaine had Jack tell his kids. They don’t take it well but the secrets has gone viral. It wasn’t the family that told Thatcher about the affair. It was the cousin that originally covered it up for favors. He hadn’t liked the fact he was a poor substitute for Jack. He dropped the secret to be seen in a better light. Thatcher is still reeling from news when TJ comes in. he saw Brandi trying to flee the city and he wants to marry her. He knows if he does that it will grant her protection. Thatcher did what he swore never to do. He called TJ stupid for wanting to marry a hooker.

Drew hasn’t let TJ’s case go. He wants to continue to investigate. He goes to the garage in order to learn more about the kid accused of killing TJ’s uncle.

TJ was wrong. Jack had assured Brandi’s safety but TJ went and risked it. Thatcher offers Brandi money to move. All she has to do is stay away from TJ. She accepts the offer never realizing something was put the drink she got offered afterwards. Thatcher protects his children and it’s not always necessarily legal. Brandi gets murdered and Thatcher offers to be of help to his daughter. He assures her that he’ll be there for her.

Sara comes out on better terms with her sister and she’s stronger when she goes to face Drew. She admits she wasn’t happy when she started the affair and if he was truthful then he admit it too. They let their relationship slide.

Elaine finds the wine delivery guy. The one that loved to flirt. She’s not stopping herself from enjoying exactly what Jack did.

Drew was close to giving up the case when he noticed something. He knows he saw TJ’s car at the suspect’s workplace.

As for their spouses, Jack and Sara are sticking together.