Beyonce Furious She Was Considered Too Fat For H&M 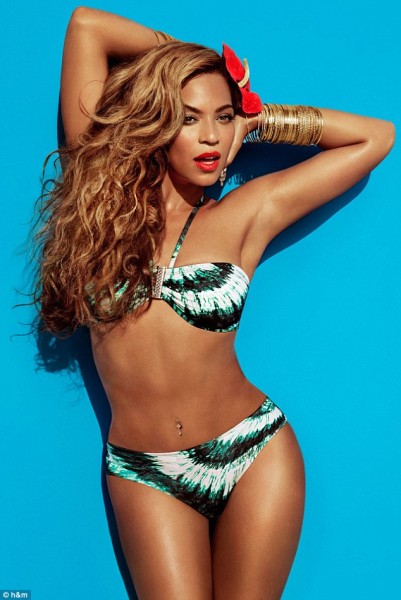 I’ll admit I’ve kinda been on a crotchity anti-Beyonce spin lately. Everything she and Jay-Z have been doing has just been annoying me to no end with their nasty “I ain’t pregnant” instagram messages among other things. But I have to give her credit here. She redeemed herself in my eyes… at least for a little while.

Word is out that Beyonce threw a major hissy fit when she found out H&M retouched her bikini ads shaving off some of her famous curves. The Bootylicious singer is the new face of the brand’s summer 2013 swimwear collection. Her people refused to sign off on the photos forcing H&M to use the originals. That’s pretty cool, no? They must have been really photoshopped for Beyonce to pull that shit though. I’m sure she wouldn’t have minded a few pounds taken off a few small places.

But, really, it’s about time Beyonce started putting her foot down about things like this. How many ads has she been a part of where her skin is ridiculously lighter? There were controversies regarding a L’Oreal ad and pics for her fourth album. She never responded to any of that criticism though. So has she learned her lesson or is she just more sensitive over wanting to look skinny?

I hate to be a cynic but there are two ways you can look at this. One is that it’s great that she’s standing up for curvier women. Lord knows there aren’t enough healthy representations in the media. But this is also the woman who demanded unflattering pics of her be taken off the internet. Did she look obviously ridiculous in the ads and turn it into a crusade against stick thin models? I’m sorry! I can just never take Beyonce at face value (even if her photos are originals)! There’s always an angle. There’s always some image crisis at play. She’s just not authentic to me. Sorry. I promised this post would be pro-Beyonce but it got twisted somewhere in the middle. My crotchity anti-Beyonce mood has clearly not run its course.

What do you make of the H&M Beyonce bikini issue? Do you think she made the company keep the originals because she was trying to make a statement or did she just not want to be in the middle of another skin-lightening type of controversy again?