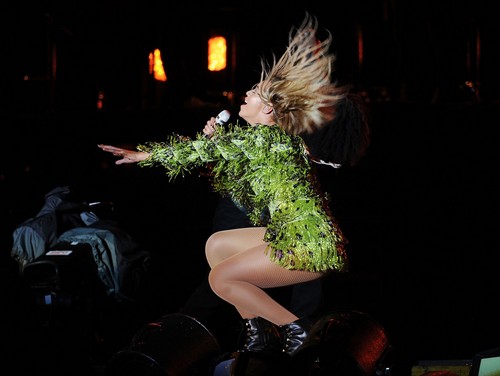 It looks like Jay-Z is going to have to work a whole lot harder if he wants to fix his dicey marriage to Beyonce. The trouble began this fall when Jay decided to book more European shows rather than tour Australia and New Zealand with his wife. Apparently the two had agreed that after Jay finished up touring with Justin Timberlake last summer then it would be his turn to support Bey’s work. Not only did he decide to do his own thing, but he never even attempted to coordinate schedules and that mistake left Beyonce fuming.

According to the Nov. 25th print edition of Star magazine Jay realized pretty quickly that he’s in trouble and so he has tried whisking Bey and Blue Ivy away on extravagant trips for quality time. Again, Bey isn’t happy. She believes that her man is looking for a quick fix rather than putting his family ahead of his career. Trips to Italy don’t change the fact that Bey is feeling like a single mother.

Jay also isn’t helping his case by being spotted out clubbing in Europe regularly. It’s supposedly a huge issue between the couple, as Beyonce realizes that he needs to be out and seen. However she feels like he has been using his career as an excuse to party every night and that’s simply not acceptable. She envisioned her family touring Australia together and Jay being hands on with their baby, instead Bey is stuck doing everything herself. Do you think that these two will work out their issues or is this the beginning of the end for hip hop royalty? Tell us your thoughts in the comments below!