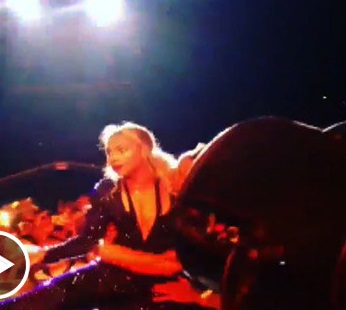 Seems that Beyoncé and Jay-Z’s latest project is a collaboration to bring another little Carter into the world. According to MediaTakeOut Beyoncé is pregnant with her second child, and despite skepticism about the claims they are not backing down and the evidence does seem to indicate that she is indeed with child.

First piece of evidence pointing to a pregnancy is the fact that she is sporting a baby bump on her otherwise toned stomach. But lets be real – a protruding stomach doesn’t always equate to a bun in the oven, sometimes it just simply means we have been indulging in the carbs more than we should so that evidence is weak at best.

Second piece of evidence is the fact that although Blue Ivy already has a nanny (or 12) they are currently looking to employ a new nanny. Not just any nanny mind you but a bilingual nanny ready to travel the globe. According to an article published in The Sun, a source claims that,

“Beyoncé and Jay Z have started advertising for a nanny who is happy to travel the world with them. The other stipulation is that she is bilingual. They want a French speaker for a number of reasons. The family has a real connection with France and Beyoncé’s nephew Julez is a French speaker, because his dad is French. They’ve already started seeing candidates and have been getting advice from friends including Gwyneth Paltrow.”

Now for those of you who want to play devil’s advocate and say maybe this nanny is for Blue Ivy, like I said, she already has one, so unless someone is about to the lose their nanny position it is safe to say this nanny is meant for the new arrival. If you’re still not convinced let me serve you up the last and best piece of evidence. It seems that as of late Beyoncé has been forgoing her usual tradition of sipping champagne after a concert, and this break in tradition can mean only one thing … get ready Blue you are about to become a big sister.