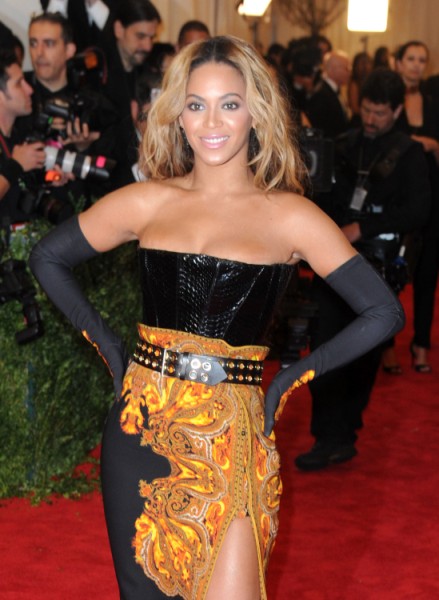 The heat surrounding Beyonce’s mysteriously growing belly continues to grow. We reported last week that the Beyonce pregnant rumors were gaining speed again. A belly bump was identified at one of her recent concerts and her “I can’t wait to have more babies!” interview only exasperated the whole thing. But now Page Six is giving all the talk a more serious spin.

It reports the Beyonce baby bump was all the gossip at the Met Ball. “Music insiders” say there definitely is a bun in the oven and Beyonce tried to conceal it under her disastrous Givenchy high-waisted dress. Bad timing? Why would you get pregnant while on a major tour? Her tours are horribly demanding but it does end in early August so it might not be that big of an issue.

I still have my doubts. That supposed baby bump just looked like bulky costume. But I would like Jay-Z and Kanye West to have a kid around the same age. Then Beyonce and Kim Kardashian would be forced to have play dates and I’m sure Beyonce would just love that! It could be the gift that keeps on giving.

But when do you think she’ll announce it? Just because she’s showing a pooch doesn’t mean she’s far along. Women tend to show a lot sooner during their second and third pregnancies. We could have a three-month wait on our hands still. And she probably won’t want to steal Kim’s thunder although she did steal Britney’s Spears’ when she flashed her bump the first time around at the 2011 MTV Video Music Awards so she has it in her to be that girl. Still, I’m on a sympathetic kick right now with Kim. I just feel so sorry for her for a whole myriad of reasons. Let’s let her have this baby in peace then Beyonce can steal the spotlight. Dealing with Kanye, Kim’s got a rough few years ahead of her as it is.