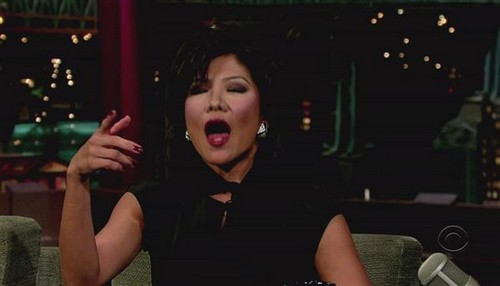 This season on Big Brother 15 I personally thought that we had heard it all with the foray of racial and homophobic slurs to death threats and talk of child pornography. But now, two of the remaining houseguests, Andy Herren and Spencer Clawson have come out and tried to taint host Julie Chen’s squeaky clean reputation. And we don’t mean knocking her for getting plastic surgery to look less Asian.

Spencer comments that he hopes Julie doesn’t show up during the final episode drunk again. Andy agrees and says that she was “drunk off her ass and I was  embarrassed for her last time” and called us the Moving Company alliance. Spencer goes on to say that Julie was slurring their alliance name, The Exterminators. Then in an all time low, Spencer said that, “if Julie wasn’t banging the president of the network she would have been fired”. By the way, if you didn’t know, Julie is married to Leslie Moonves, the President and CEO of CBS.

I don’t know if Julie Chen was drunk but rumour has it that she was in fact slurring her words; maybe she is on medication – Granny’s moonshine medication? In any case, the houseguests should not have bashed her on the live feeds, it was a total lack of respect. But hey, we already know they have no respect and nothing but trash has spewed out of their mouths all season long.

Wow, can you imagine saying something like that about your boss and his/her boss? You would be fired in a heartbeat. Big Brother should dump Andy and Spencer out of the house and just give the money to charity.

I really hope that Julie confronts Spencer and Andy about what they said about her being drunk in the finale; it would really make for some good TV and if she does, I have a feeling two guys are going to be doing a lot back-peddling.