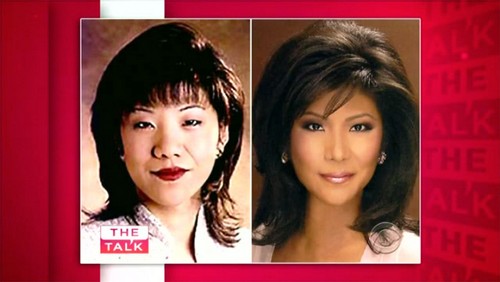 CBS’ daytime show, The Talk began its fourth season earlier this week. To kick off premier week, one co-host revealed something each day. Julie Chen revealed she had plastic surgery when she was younger. This is not something shocking in Hollywood, especially when sitting next to Sharon Osbourne. The reasoning for Julie’s decision is what’s most interesting. She wanted to look “less Asian.”

Julie Chen began her television career as a local reporter in Dayton, Ohio. 25 years old at the time, she asked her news director if she could fill in for some of the anchors during the holidays. “You will never be on this anchor desk, because you’re Chinese,” was his response. Dayton had a small Asian community and he felt viewers would not find Chen relatable. He also told her that her eye shape was an issue because they made her look “disinterested and bored” on camera.

“Well, fast forward, I’m like I need to get another job—if I can—so I start meeting with agents for career advice. This one big-time agent basically told me the same thing. He said, ‘I cannot represent you unless you get plastic surgery to make your eyes look bigger,” Chen said as she shared her story.

She eventually got the surgery and admitted that her career took off afterwards. Although she often wondered if she “gave in to the man,” she doesn’t have any regrets.  Wait – Julie wonders if she sold out? Seriously?

“I have to live with every decision that I’ve made and it got me to where we are today. And I’m not going to look back.”
Chen has clearly done well career wise – I mean she gets to host Big Brother – how much better can life get? But what role should appearance, especially racial/ethnic characteristics, play in one’s career?  Would you alter your appearance if it would help you advance? Share your thoughts with us.