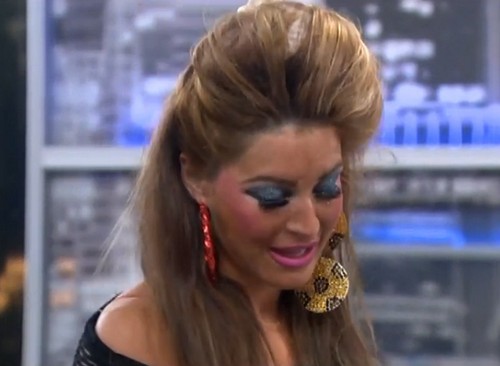 In the past 48 hours the Elissa Slater bashing has gotten completely out of control to the point that the final five wanted to take a picture of her, put it in the toilet and deface it. Spencer Clawson kicked her suitcase and nobody wanted to pack it. It is clear that Big Brother 15  production is behind this bashing as every time some is called into the diary room, they seem to bash Elissa even harder after they emerge.

Big Brother production wants the houseguests to bash Elissa for two reasons: Firstly, they want Amanda Zuckerman to win America’s Favorite so they can save face to those people who did not subscribe to the live feeds and show them that Amanda is not as bad as some people said she was.  Julie Chen already began the campaign to repair Amanda’s tainted reputation last Thursday when she was shockingly joking and laughing with her. After Julie excoriated Aaryn for her racism we expected Amanda, who was far more racist then Aaryn, to really get walloped,  Instead CBS decided to paint Amanda as a “bully.”  A bully can be sold on The Amazing Race but not a racist.

The bashing going on in the house is so bad and disgusting that it is literally all that is being discussed and both Spencer and Andy are the ones at the forefront. Here’s just a taste of it: “Elissa I couldn’t imagine living with a bigger lunatic in this house It was insane living with you and I hated every second of it.” GinaMarie Zimmerman pulls a piece of cake that had all their faces on it and asks Spencer what they should do with it, he says “put it in the toilet we’ll pi$$ and sh!t on it and you know the things I hated about her… Her b*tch attitude her b*tch lifestyle and her b!*ch face.“

Well, if any of you forget just how bad Amanda is during the Elissa bashing, let me remind you. Along with the countless forays of homophobic and racial slurs, Amanda has openly discussed killing and raping Jessie Kowalski and killing both Candice Stewart and Elissa. There was nobody in season 15 that was as bad as Amanda, period. The only remaining houseguest who seems to have any morals amongst the degenerates still playing this game is McCrae Olson – he really looks uncomfortable when everyone bashes Elissa, kind of how he looked when all the filth was spewing out of Amanda’s mouth.