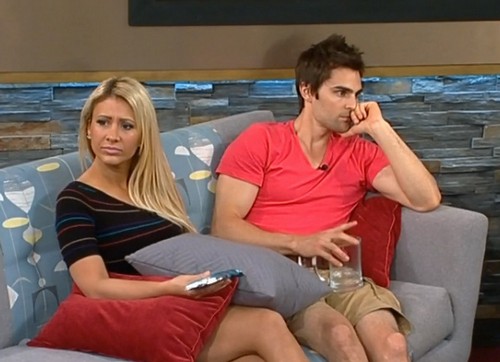 Is GinaMarie Zimmerman spending Halloween apart from her boyfriend, Nick Uhas? As fans of Big Brother know, GinaMarie and Nick started a showmance on the show, only for it to be torn apart when Nick was evicted before her. However, battling reports that it was just a showmance, the duo have been spotted together many times since the show has ended, indicating that they actually are more genuine that people give them credit for.

GinaMarie shared her Halloween plans through Twitter, saying that she was going to dress up as Cinderella. Since she and Nick are such a cutesy couple, many fans assumed that if she was dressing up as Cinderella, then he would dress up as Prince Charming. Alas, he seems to have different plans since he tweeted, “prolly gonna rock the Peter Pan this year!!”

Well, Gina is in New York while Nick is travelling for his YouKnowYouTube tour, which means they might not be spending Halloween together. I guess dressing as a couple when they’re not even spending the day together is pointless, but it must be a downer for them.

There are also people who are suggesting that Gina and Nick are on a break, but that’s clearly not true since Gina has constantly been tweeting about Nick. If they’re on break, their behavior certainly doesn’t support the hypothesis. Of course, it’s more likely that they’re not on a break and are simply spending Halloween apart. Or they’re spending it together and just not dressing up together, although I find that less likely.

What do you guys think about GinaMarie’s Halloween plans? Do you think everything’s fine between her and Nick? Let us know your thoughts in the comments.