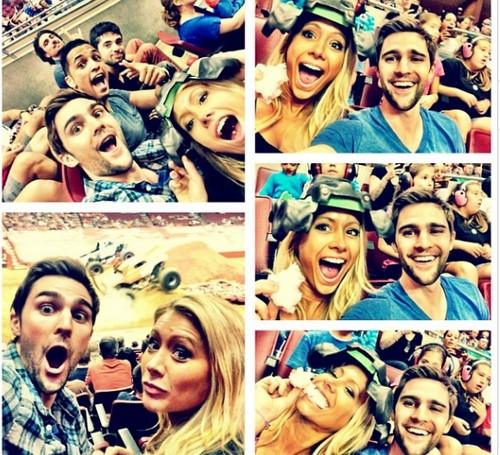 Big Brother 15 racist GinaMarie Zimmerman and her showmance partner Nick Uhas are still pretending to be a couple. I know it’s hard to stomach GinaMarie as people don’t come much coarser or ruder than this foul-mouthed Big Brother losing contestant. However she is still trying to hang desperately onto whatever small amount of fame she managed to eke out of the most disappointing season of Big Brother.

So Nick and GinaMarie managed to drag themselves to a Monster Truck Rally as a couple on a date. Doesn’t Monster Trucking seem a fitting event at which to find these two geniuses? Nick was kind enough to share some pictures of the happy couple on Instagram which we feature for you here.

Aren’t you glad that GinaMarie lost Big Brother? I not only watched the show but also the live feeds and let me tell you – they don’t come any more disgusting than GinaMarie. The girl speaks like pure trailer trash and seems proud of it!

Let’s not forget that GinaMarie was fired from East Coast USA Pageant for acting like such a racist redneck. Apart from her usual racist tirades, she called welfare, “n**ger insurance.”  If this is how she speaks while being recorded you can only imagine what she says in private.