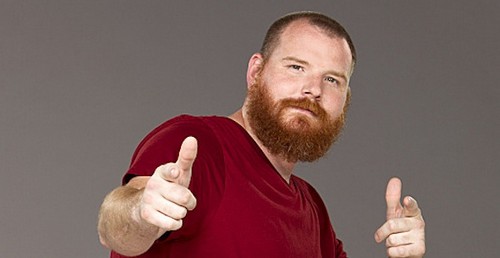 Fans of Big Brother 15 were pretty shocked to see Spencer Clawson actually accomplish something other than his typical not-so-funny jokes – he won Head of Household! As far as strategy goes, Spencer appears to be lacking that despite being in an alliance with Judd Daughtery, GinaMarie Zimmerman, and Andy Herren — are in the Exterminators alliance. However the guys are all close to McCrae Olson, so it’s anyones’ guess how this week will really shake out.

Spencer told his alliance that McCrae is definitely going up, they just had to decide who was going up with him. Andy once again dodged a bullet and in spite of betraying McCrae and Amanda Zuckerman last night to vote out Amanda, he remains in everyone’s good graces. Of course McCrae still doesn’t know — and the Exterminators are keeping Andy’s move a secret, at least for now.

Andy even went so far as to fake apologize to the houseguests within McCrae’s earshot, for keeping Amanda even though he really voted her out. I have to wonder when everything is going to crash in on Andy and his secret moves will be revealed. That probably won’t happen anytime soon because Andy is actually faring well! As HoH, Spencer had to give three HGs punishments and one a prize. Since Spencer has that “I trust you/you trust me” deal with Andy, he gave Andy some money and also told him he’s not even an option for replacement nomination this week. “You’re final four with me.”

Spencer had no problem informing GinaMarie that either she or Judd is going up for elimination against McCrae so if McCrae wins yet another POV competition it’ll likely be GinaMarie that leaves next.

Were you surprised to see Spencer finally having a moment of importance in the house? Do you think McCrae will really be at risk to leave or is this week going to be GinaMarie’s swan song? What about Andy? Will his strategy ultimately pay off or is it going to backfire? Tell us your thoughts in the comments below!