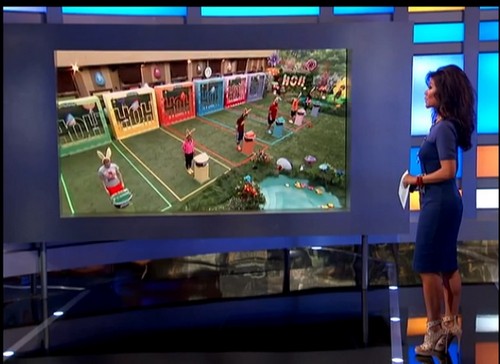 Tonight on CBS BIG BROTHER returns for the 29th episode of their 15th season. On tonight’s episode we see who becomes HoH and who the new HoH decides to put up on the block for elimination. Did you watch the last episode where someone was evicted from the BB house? We did and we recapped it right here for you!

On last week’s show we saw Aaryn evicted from the Big Brother house.  Aaryn had her interview with Julie after and she was surprised when Julie told her people viewed her as a racist.  Aaryn’s explanation basically was, “I from Texas y’all and that is how we speak, we don’t mean it.”  The audience snickered….  After Aaryn was evicted there were some interviews with former contestants and then by the time they started the HoH competition it was too late to see who won.

On tonight’s show we get to see who won the Head of Household competition.  Not only will we see the new HoH there will be a luxury competition held where one contestant will win 10,000.  This will be a crazy Big Brother week because it is going to be a double eviction week.  Tonight we will also find out who the new HoH puts up for eviction.  If you are dying to know everything that has happened in the past few days we have spoiled the episodes for you.  To find out the new HoH [CLICK HERE], this week’s nomination [CLICK HERE], this week’s PoV winner [CLICK HERE].

Tonight’s show opens with the continuation of the HoH competition.  Everyone agrees that this HoH is one of the most important.  Not only is it a HoH competition but the two house-guests who finish last have to wear chicken suits.  Poor Spencer, keeps getting the eggs to the end of the chicken wire but just as he gets it to the end of it the egg drops and breaks and he has to start back again.

Gina Marie and Andy are in the lead for most of the competition.  GinaMarie pulled ahead and was at 9 out of 10 eggs and the closest person behind her was Andy with 6 eggs.  It looks like GinaMarie is going to win it.

Amanda wants Andy to win and Elissa is pulling for GinaMarie.  GinaMarie is feeling confident and for good reason.  She wins!  GinaMarie is HoH for the week.  Judd and Spencer finished last and they have to wear chicken suits.

Amanda does not know where GinaMarie’s head is but she is determined to put it in the right direction, towards Elissa.  Amanda is trying to manipulate GinaMarie into putting Elissa on the block.  Amanda is not fooling GinaMarie she knows Amanda and McCrae were using Aaryn as a puppet.

Andy is thrilled GinaMarie won HoH he thinks it is great for “The Exterminators.”    GinaMarie tells Judd and Andy she is putting Amanda and McCrae up.  Amanda talks to Spencer she wants Judd to go up – she tells Spencer she is going to be up GinaMarie’s ass all week.

Amanda tells McCrae that they have to get Elissa out this week.  Amanda is sick of seeing her joker face, she says she hates her.

A voice announces that Spencer and Judd have to go to the Diary Room, they come back with chicken suits on.  Too funny!  They have to wear them for 48 hours.

Amanda comes to asks GinaMarie if she has any idea who she is putting up.  GinaMarie and lies to her and says she is putting up Elissa.  She asks who she will put up with her?  GinaMarie claims she does not know yet.  Amanda asks that she does not put up her and McCrae.  Amanda tells her she has to get rid of Elissa.  She tells Amanda she has to wash her hair.  When Amanda leaves she laughs her head off because she intends to put up Amanda and McCrae.

GinaMarie calls everyone to her HoH room.  As GinaMarie says Elissa and Amanda look like they are going to beat the plastic out of each other.  Elissa does not understand why Amanda has to harass her for 24 hours a day.  Amanda walks in and tells Elissa she is going up on the block tomorrow.

Amanda comes in and tells Elissa she does not want to fight with her but feels like she antagonizes her, Elissa walks out of the room.  Amanda comes out and tells everyone she told Elissa she does not want to fight.  Amanda sits down and tells everyone she feels like she is in high school and starts crying.  Judd does not buy the tears.  Spencer tries to make Amanda feel better.

Amanda tells GinaMarie she is over it, Elissa is trying to torture her.  Amanda is upset because she does not feel she is a mean person.  ummm, Amanda is clearly CRAZY!  GinaMarie is surprised, Amanda bullied Elissa all last week and now she is crying, GinaMarie does not buy it and neither do I.  Amanda is unstable, one minute happy, next a bully and then crying.

The Houseguests come downstairs and there are balloons everywhere – it is a luxury competition.  There is a 10,000 prize – the house-guest that collects three chips, a one, a zero and a K chip wins the money.  Spencer is thrilled.  They start popping the balloons.  Spencer found chip but he is keeping his mouth shut he does not want anyone to know how close he is.  Amanda has her own method rather than pop the balloons she is shaking them.

Amanda heads to the HoH room but GinaMarie is talking to Judd and she asked Amanda to leave for a couple of minutes.  Amanda leaves and then comes back and asks if they are making out.  Judd leaves.  Amanda tells GinaMarie she wants to reiterate where she is at.  She tells her if she puts up Elissa and Judd next week there will only be one target on her back, if that.  McCrae walks in.   Amanda then continues that Elissa got rid of Nick and Aaryn so she is the one to get rid of.  Amanda gets up and leaves McCrae to talk to GinaMarie.

Amanda is starting to think that perhaps GinaMarie is not as dumb as she looks.  Amanda comes out and tells Andy that GinaMarie are going to put up Judd and Elissa.  Andy thinks Amanda and McCrae are definitely going to be blindsided at least he hopes so.

The first key GinaMarie pulls is Andy, the second is Spencer, the third is Elissa and Amanda looks like she is going to faint the next is Judd.

The look on Amanda and McCrae’s face is priceless.  Amanda is crying again because she tried her best.  McCrae realizes that one of them is going home.  Amanda is crying and GinaMarie is not buying it, Amanda has been bullying people for weeks and she has no sympathy for her.

That is it for tonight, come back Wed to see who wins the PoV, but if you have to know now – we have spoiled the episode for you and you can read the spoiler RIGHT HERE!