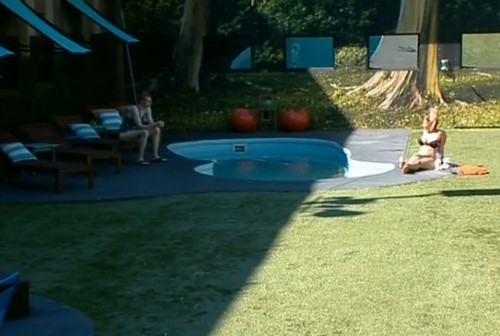 Tonight on CBS BIG BROTHER returns with the 35th episode of the 15th season and we are down to the final three houseguests: GinaMarie; Spencer and Andy, with only two episodes left.  On tonight’s show the final HoH competition begins.  Did you watch last night’s episode?  We did and we recapped it right here for you!

On last week’s episode we found out who Andy put up for eviction: McCrae and Spencer.  At the Veto competition Andy won the PoV and he decided to keep the nominations intact.  We also got a chance to see inside the jury house for the first time, everyone seems to be getting along.  When voting time came McCrae was evicted.  McCrae told Julie he was blindsided.  He also said he felt his showmance with Amanda wrecked his game.  At the end of the episode Julie addressed the final three and told them there was one more HoH and they would have to turn against each other.

Big Brother 2013 airs tonight at 8:30 PM EST with its 35th episode, we will be live blogging the show with all the up-to-the-minute details so make sure to come back to Celeb Dirty Laundry and watch the show with us. Can’t wait to see how all the drama plays out, how about you? While you wait for the recap, let us know what you think of this season of Big Brother, so far?

RECAP: We get a look back at McCrae walking out of the house which makes Andy feel really nervous because he double crossed a lot of people. We rewind back to when Andy revealed to McCrae about the Exterminator alliance and how they took out all the big players.

A look back now at The Moving Company alliance; McCrae seemed happy in that alliance but in the end it was Jeremy that caused the dismantle of the alliance. On Day 11 Jeremy took the wine and the Have Nots for the week were not happy when they were finally able to enjoy some. At the pool, Jeremy admits he took it and Aaryn is surprised. Jeremy heads into the house and tells everyone that he drank the red wine and didn’t give a f*ck who cared. Amanda then heads out and confronts Jeremy who tells her to shut up and listen to him.

Now we take a look at when Jeremy discovered that Elissa was Rachel’s sister; the rumour spread like wildfire around the house.

Next, it is the hook ups; David and Aaryn, Amanda and McCrae. Personally, I think it is kind of gross to see when Amanda and McCrae first hooked up. McCrae calls Amanda a man eater, no kidding. Now it is on to the Big Brother wedding officiated by Andy.

On to Judd and we see him hooking up with Jessie, then Aaryn which got him the name “Judd The Stud”.

Ginamarie now looks back at Nick leaving the house and her having a melt down; she calls all the houseguests that voted him out cockroaches.

Spencer takes a look back to his going to Candy Land. Candice woke up and was bombarded with people telling her that Spencer wanted her out, she confronts him in front of the whole house.

Amanda now comes up and specifically how she terrified Elissa with her bullying. Amanda is dressing in a robe and a party hat and spews insults at Elissa for everyone to hear. Amanda threatened to torture Elissa every single day until she got her out of the house. Ginamarie wanted to step in, but she new interrupting the crazy b*tch would cause a huge problem.

The three talk about how they rarely found a place to be alone, but the diary room was the one place where they could at least speak their minds. Elissa asks if there is a process where she could eliminate herself. Others; Amanda, Ginamarie, Andy and even Judd go in there and cry. McCrae was closing to crying, Jessie was hysterical once and so was Ginamarie. Candice had a total meltdown.

They talk about the best fight and say it was between Ginamarie and Amanda; when Amanda gave her a smirk. Ginamarie calls Amanda a “freakin’ dirt bag whore” and a floater. Amanda walks right up to Ginamarie and tries to get in her face; the fight almost becomes confrontational. Amanda leaves the kitchen and heads to the Have Not room, McCrae follows her and Amanda gives him crap for not being a man and picking up for her. McCrae says that he is playing a game, that is the reason he said nothing.

Time for the first round of the three part of the final HoH competition. Houseguests have to roller skate in a disco themed back yard. Because it is the final HoH, everyone is able to play.

That’s it for tonight, don’t forget to come back on Wednesday for the 90 minute season finale.