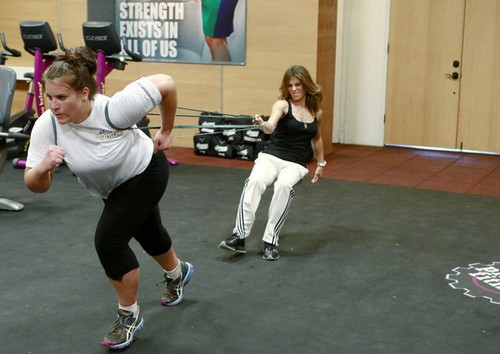 Our live recap of NBC’s THE BIGGEST LOSER returns tonight for an all new episode entitled “Tough Love.” We will watch the remaining eight players compete as singles rather than in groups and face a Valentine’s Day Temptation.  We assume the temptation will be edible not lovable! Did you watch last week’s show? We did and we recapped it here for you?

Last week’s show marked the halfway point of the season, and the contestants found out that the weight of only one player on each team would count.  Even worse, they didn’t know which player’s weight would count until the weigh-in.  The adult contestants competed in a crazy challenge that required them to avoid three swinging pendulums while walking on a balance beam to retrieve calorie-coded plates matching five specific dishes. Later, during last chance workouts, Dolvett’s team had a special visit with Muhammed Ali’s daughter, five-time undefeated world champion fighter Laila Ali, who put them through a fun and challenging boxing workout.  At the end of the show David was not the biggest loser and went home.

On tonight’s show it’s halfway through the competition, and the remaining eight players go to singles this week. The contestants face their first temptation in honor of Valentine’s Day, featuring favorite Valentine’s Day treats and the promise of the winner getting a weigh-in-advantage for themselves and a friend. Meanwhile, the trainers continue to motivate the kid participants to stay active and work toward their goals at home. Jillian Michaels arranges for Sunny to take a Bollywood dance class, Dolvett motivates Lindsay to attend a cheerleading practice, and Bingo anxiously waits for news from the doctor about whether he’ll be able to start practicing for the youth baseball league tryouts that Bob set up for him.

Back at the ranch, one player displays an amazing act of kindness, and another has an emotional, heart to heart talk with a trainer about the circumstances leading to his weight gain. Later, a racing challenge leads to two players winning heartwarming reunions with loved ones, and in this week’s Challenge America segment, Season 11 winner Olivia Ward and her husband share a healthy way that couples can celebrate Valentine’s Day. And finally, the elimination following the weigh-in forces one contestant to make their most difficult choice yet at the ranch.

The Biggest Loser season 14 episode 7 airs at 8PM on NBC and we will be live blogging it with all the up-to-the-minute details. So make sure to come back to this spot and spend the evening with us! Make sure to refresh often to get the most current details!  While you wait for the recap, get friendly with the contestants for Season 14 HERE!

The show opens with Alison coming in and congratulating everyone about the amazing job they have all done.  She especially congratulates Danni because she has been alone for long.  Alison tells the team they are now going to know how Danni felt because they are not going to be in teams anymore, they are going in singles.

They will weigh in as singles and two people will fall below the yellow line each week and then the remaining contestants will vote for who goes home.  This is a real game changer and it should get really competitive and the dynamics in the house are going to change.

The remaining contestants come into the room where Alison is.  The room is full of deserts: chocolate cake, red velvet, cupcakes etc.  It is all the contestants favorite things.

This challenge is all about Valentine’s day – they are about to find out how hard it is to resist.  This is their first temptation.  The contestants will have 10 minutes to each as many calories as they can.  The contestant who eats the most calories will get a 2 lbs advantage this week and get to give a 2 lb advantage to someone.  There is one more little twist – for the temptation they will be competing in the dark.

Fracelina starts eating immediately, Alex is chowing down too.  Joe is not doing it, he is not worried he will lose enough weird and he does not need the advantage.  Michael is not doing it either, he says it is practice for the real world.  Danni decides to start working out she is not eating a sweet.

Jeff takes a taste of the red velvet cake and 3 cupcakes.  Gina is a diabetic and there is no way she is trying this stuff.  However, she moves things around to make people think she is eating.

3 people ate and 5 people did not.  Jeff ate 270 calories, Francelina ate 1,081 calories and Alex ate 1,036 calories.  Francelina won and she has a 2 lbs advantage this week.  She decides to give the other 2 lb advantage to Alex.

Jackson is surprised she did not give him the advantage and realizes that now that they are singles it is a whole different game.

The trainers check in with the kids.  Jillian has set up a Bollywood course for Sunny.  Bob calls Bingo, as soon as his boot comes off his broken foot – Bob has set up Bingo a baseball tryout.  Dolvett has great news for Lindsey the cheerleading squad has made her a honorary member.

The contestants tell the trainers that they had a temptation challenge.  Dolvett takes Michael and Gina to be with her.  Jillian takes Jeff, Francelina and Alex.  Bob takes Joe, Danni and Jackson.  The contestants head out with their trainers.

Jill keeps attacked Jeff and he is starting to get emotionally frustrated with her and is afraid he is going to explode.  Jillian thinks he is carrying a huge burden.  Jeff tells Jillian he is fed up listening to her talk.

After the workout Jillian goes to see Jeff to check in to see if he is okay.  She tells him he is smart and good looking and wants to know what life should look like for him.  Jillian wants to know why he hides his emotions, because she feels it is holding him back!

Last chance workout – Michael thinks people feel he is going home, he wants to show them.  Jillian tells the people who have have the 2lb advantage don’t count on that to save them.  Alex is confident it will save her.  Bob sends Alex up the hill and tells her to do jump rope when she gets there.  She gets to the top of the hill and realizes she forgot the jump rope and has to go back down.  She is pissed and shows Bob attitude.  Bob is not pleased with her.

Francelina is below the yellow line and so is Michael.  The other contestants will have to vote who is leaving.  They will enter the voting booth and vote.  If there is a tie the contestant with the lowest percentage of weight loss will go home.  That would be Michael, so in the event of a tie he is going.

Michael has enough votes and he is not the Biggest Loser and he is going home.  Michael is shocked that Jeff broke his word and voted for him.  Jeff always promised he would not vote for Michael.  Jeff said at the end of the day he did something for himself and he has to stop worrying about other people.