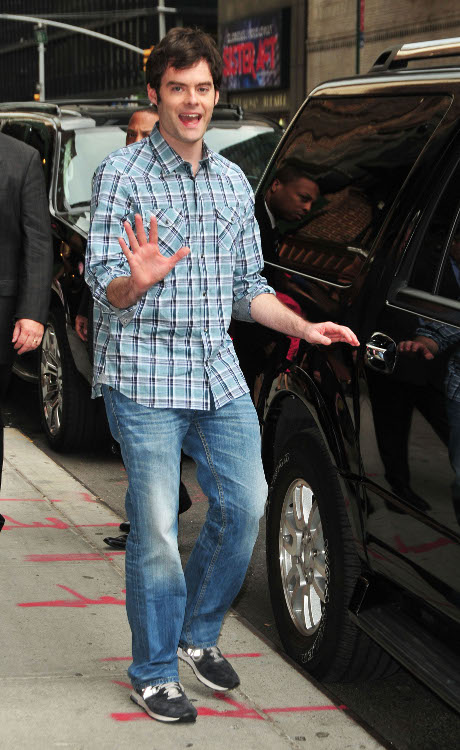 Everyone loves Bill Hader. What’s not to love? He’s hilarious, a fantastic comedian, and a team player. After years of being on Saturday Night Live, Hader also has some hilarious dirt on some of the high-profile guests that have visited the show over the years. And not surprisingly, Justin Bieber is a douchebag.

While Hader was on Howard Stern, he took some time to talk about Justin Bieber. He explained that when Justin came as a musical guest on SNL, he decided to bring an entourage of twenty people with him. TWENTY PEOPLE! Hader explains, “Justin Bieber showed up with like 20 guys. And every time, backstage is a very small constructed place, he had a guy holding a slice of pizza, a guy holding a Diet Coke. You were trying to fight around all these people to get dressed.”

Justin was so hideous to deal with that everybody else probably looked like angels. That certainly explains Hader’s comments about Justin Timberlake. When discussing JT, Hader says, “He’s great…Also, guy doesn’t show up with anybody. It’s just him. He’s a real class act, that guy.”

Justin Timberlake, whatever else his flaws may be, is always a consummate professional. He’s also a veteran SNL host so he knows the protocol of what you’re supposed to do at SNL. Really though, the only protocol is to not act like asshole, which Bieber is clearly incapable of.

Hader also slammed some other famous hosts, explaining, “Ashton Kutcher tried to have sex with that llama we keep backstage and Tom Brady used one of Lorne’s suits as toilet paper, even though we bought him the fancy stuff, and Gwyneth Paltrow, well, she was the worst of all. She gave the writers the idea for The Californians. We hated it, too.”