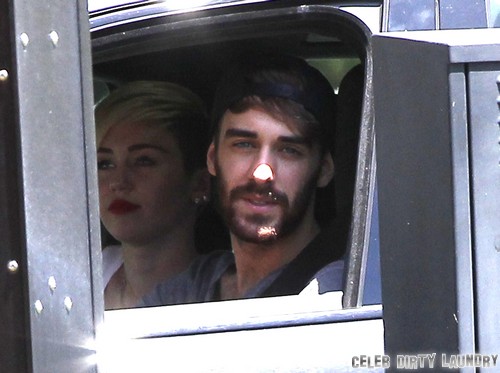 What is it with these couples that split up or file for divorce and then regret it days later? In this instance I’m talking about Billy Ray Cyrus and his wife, Tish. Ten days ago she filed for divorce, but the duo was spotted out yesterday with their daughter Noah Cyrus, grabbing lunch in North Hollywood. I’m all for couples needing to learn how to co-parent when the relationship fails, but in a few photos, Tish and Billy Ray still looked pretty cozy. Like, her head was on his shoulder.  That is not typical of a couple ready to divorce!

If you remember back three years Billy Ray filed for divorce and then did a 180, deciding to salvage the marriage. Now it looks like it may be Tish’s turn to have jumped the gun. We also know that their daughter, Miley Cyrus was really upset over the impending divorce. She has been an attention-seeking train wreck for awhile now. Could her outburst and no doubt threats have pushed the couple to reconsider?  Will they stay together for the kids sake because they fear what their children will do if they don’t?

Do you think that Tish really wants to end her marriage or was it a spite move while fighting with Billy Ray that she now regrets? Will this couple ever really divorce or are they just going to make their problems publicly known and then quietly repair them?  Either way, the drama seems to be knee-deep in the Cyrus household and that in itself can’t be good for anyone.

Do you think they likely should have split 3 years ago and just choose to keep it together until the kids are grown? Tell us your thoughts in the comments below!

Miley Cyrus stops at the Panda Express drive through to get some lunch before hitting up a music studio in Burbank, California on June 21