See Miley Cyrus And Harry Styles In Bed Together (Photos) 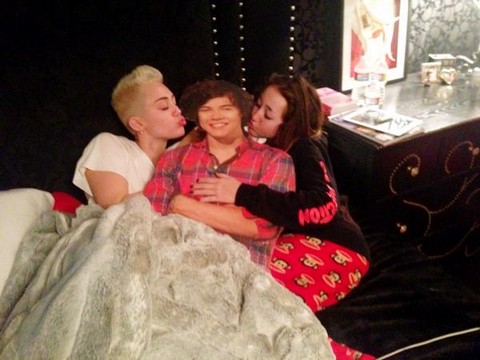 Harry Styles may be recently single, but that doesn’t mean he isn’t the envy of girls—engaged or otherwise—across the globe! Miley Cyrus shared pictures on her Twitter account today, showing herself cozying up to Harry, who was wearing a plaid button down shirt. We’d expect Liam Hemsworth to go all Hunger Games on his ass, but it turns out it didn’t mean anything! Is Liam so used to Miley’s wild antics (sex dolls, strippers) that another man is no big deal? Not exactly. The Harry that Miley crawled into bed with was a cardboard, life-sized cut out!

Miley’s little sister Noah Cyrus celebrated her 13th birthday today, and in typical tween style, wanted nothing more than One Direction everything! Her birthday gifts included the Harry cut out, a One Direction calendar, and a Harry bobble head. Miley previously tweeted that Noah asked for a One Direction concert at her birthday party, but it looks like she had to settle. We love Miley’s sense of humor. It’s like the automatic response with her—I like it. I’m going to make it sexy. Not that Harry isn’t sexy otherwise—except for his freaky tattoo collection!

Harry just dumped Taylor Swift while on vacation in the British Virgin Isles. The singer was forced to fly home alone, while Harry stayed behind to party with bikini-clad women and Richard Branson himself. The couple were all smiles and kisses at New Year’s Eve in New York City, so we’re dying to know what finally split them up. Best guess is a Harry affair—he isn’t exactly shy about his sexuality, so we wouldn’t be surprised if he got a little to frisky with one of his many admirers. Whatever it was, it doesn’t seem to have upset him too much. Meanwhile, we’re sure that Taylor is at home penning her next number-one-on-iTunes whiny hit. 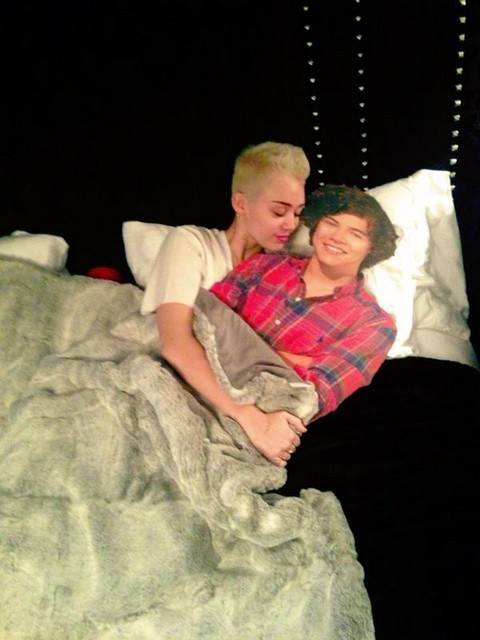