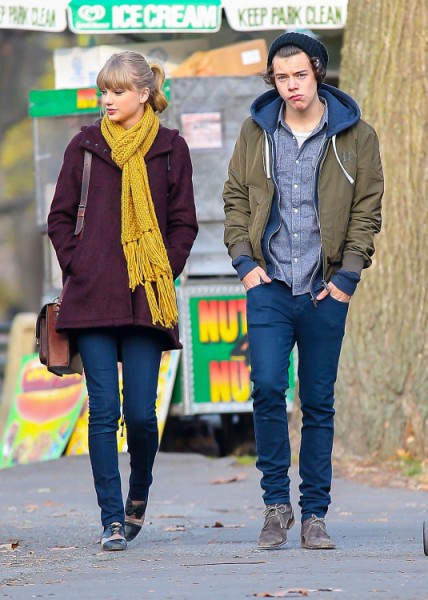 Poor Taylor Swift. Did another one get away? That’s what the people are saying today as reports fly in that she and Harry Styles had a major blow out while on vacation last weekend in the British Virgin Islands.

Last time I checked everything was going along all rainbows and roses. The couple kissed for their fans on New Year’s Eve and then took their romance on the road for a quickie vacation before they both had to get back to work. There were even those tranquil photos taken of them on the island with fellow vacationers. But the dream must have ended sometime after that because on Jan. 4 Taylor caught the first flight off of Virgin Gorda while Harry stayed to party a few days longer before going back to the UK. Reportedly the couple had a huge fight that night and Taylor cut and ran.

So did Taylor just need to get back to work or could the break up rumors be true? Well… if we totally read way too much into Taylor’s tweets she might be telling us something. On Jan. 5 she cryptically tweeted, “… ’til you put me down” which is a line from her new song I Knew You Were Trouble:

Those don’t sound like happy in love lyrics do they? Could Taylor just be promoting her album? I doubt it. It’s already killing it. She doesn’t need to self-promote right now. It has to be about Harry, right? And, if so, it’s not the most comforting message. It’s definitely a “you screwed me over” type of thing. So much for daddy’s warning.

So what went wrong? Did Harry choose partying over his girlfriend? Did he not want to run to be with her every  time Taylor snapped her fingers? God, I could see that. Again, if we read way too much into the lyrics we could maybe guestimate that Harry wined, dined and led her on but couldn’t commit. It probably has something to do with the fact that he’s a TEENAGER! Start dating older men Taylor! There. I said my peace. Conor Kennedy’s sweating bullets right now because he knows a weepy phone call is coming.

Do you think the Taylor Swift break up tweet means Harry Styles dumped her or was Taylor just feeling a little melancholic that day? Was I the only person who saw this coming?