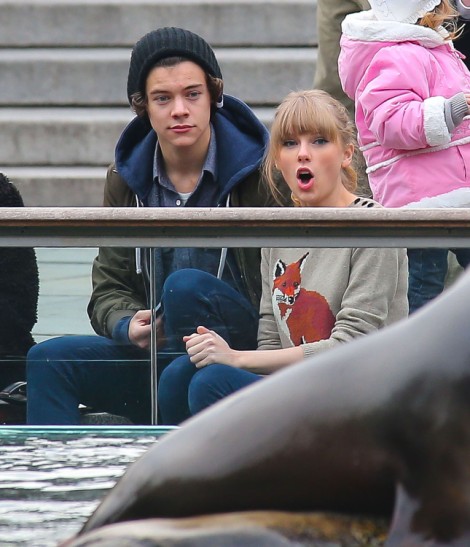 Could Taylor Swift’s new and hasty relationship with One Direction hottie, Harry Styles, be all for show? That’s what the tabloids are saying this week because apparently Taylor wants to leave her country music roots behind and thinks a hook-up with Harry will make her more legit in the pop world.

“She sees all the press her pal Selena Gomez gets from dating Justin Bieber,“ a source told In Touch magazine. “She’s very calculated when it comes to dating the right men. Taylor wants to break into pop music from country. She uses men to push her career forward.”

I actually totally buy this. She rushes so quick from man to man you have to imagine her manager is lining them up so she doesn’t have to think too hard. How can you be so head over heels for Conor Kennedy and move on so fast to Harry? I get being in your early 20s but it’s all just a little too manic for me. And a few of the men she’s dated have been maybe gaybes. Taylor Lautner and Jake Gyllenhaal have had the gay rumors following them for years. I have no idea if it’s true but Taylor seems like the kind of girl that will pose for some romantic shots with a guy if it served both their purposes. So, naturally, I’ve heard Taylor is bearding for Harry but that might only be because Taylor has an alleged history of doing so.

But does Taylor need to use Harry for publicity? This is where In Touch gets it wrong because I don’t think so. Her new album is booming. Pop fans as well as country fans embrace her. She’s considered a legit songwriter. She might even start acting soon. The fact that she needs a boyfriend to legitimize her is insulting. HOWEVER, does Harry need Taylor? I think so. One Direction is popular but not as big in the States yet. Here’s how this probably went down. Harry’s manager found out Taylor got dumped by Conor Kennedy and asked her manager if she’d play along through the winter. Taylor is nursing a broken heart and promoting her album so she could use a little excitement so agreed to “date” Harry to raise his exposure and, perhaps, make Conor jealous. Voila! It’s that easy. They’ll break up sometime in the coming months because the long-distance thing is too much and everyone will know Harry’s name and Taylor will be free to reunite with her Kennedy. Taylor’s love life really is just a badly written high school movie.

So what do you think? Is Taylor Swift using Harry or is something really going on there? You remember the kiss, right? Didn’t it seem a little too forced?

Attached – Photos of Taylor and Harry watching seals and holding babies. Are you seriously going to fight with me on this?